We may get commissions for purchases made through links in this post.

If you’re doing everything in your power to eliminate litter box smells but nothing seems to be working, you may consider getting an air purifier. But, will that actually help? How can an air purifier help fight against litter odors?

Getting an air purifier can help reduce litter box odors, so it’s certainly worth looking into getting one for your home. 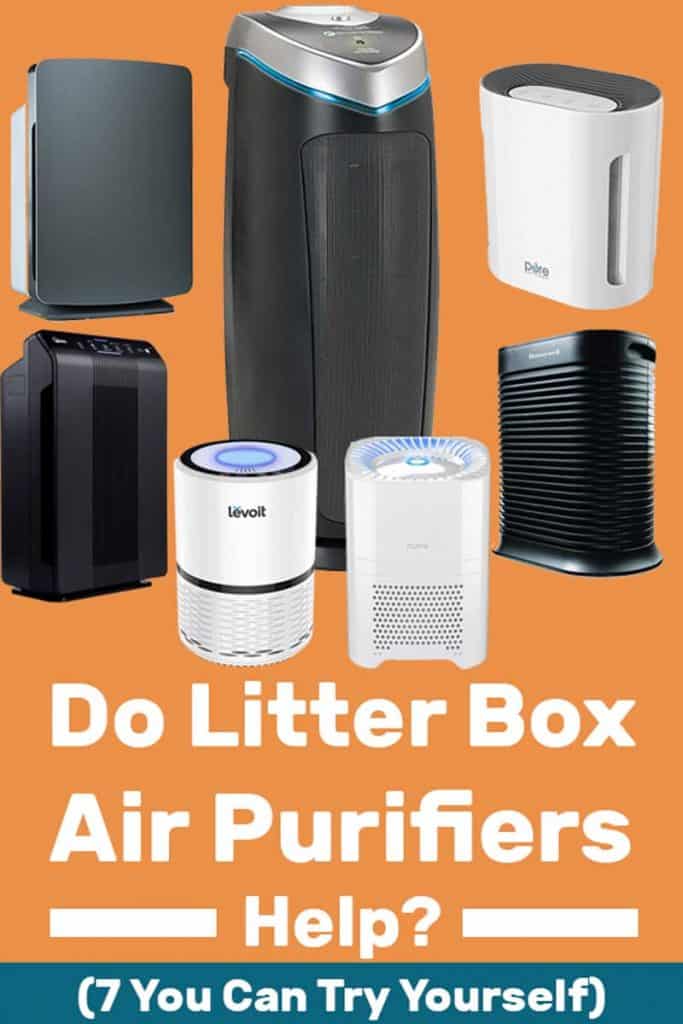 Besides that, there are many other reasons someone may want an air purifier.

Keep reading as we take a closer look at exactly what air purifiers do, how they can help you, and go over a few of our favorite models that are great for pet odors.

Air purifiers clean the air. They work by pulling air into them with a fan action. As the air goes in, a series of filters removes pollutants from it. Then, clean air is blown back into circulation.

Litter box and other pet odors are caused by microscopic particles that get into the air. These particles come from both urine and fecal matter that are deposited into the litter box. Once they become airborne, they find their way into our noses where we smell them.

When you have an air purifier placed near a litter box, anything that gets into the air will be pulled into the purifier and removed so they never reach your nose. As you can imagine, the closer you have your air purifier to the litter box, the better job it does of removing airborne odors.

Something to keep in mind is that an air purifier can only do so much and should never be a replacement for regularly cleaning the litter box. It will only remove the odor that’s in the air. You should still be cleaning out your cat’s litter boxes at least once a day.

Will an Air Purifier Help with Cat Litter Dust?

Cat litter dust is another common problem faced by cat owners. It can be particularly difficult to change the litter box if you have asthma as the dust can cause an attack as you breathe it in.

This dust also poses a health risk for people and animals with allergies. The fine particles find their way into sensitive nasal cavities and irritate them. If you notice your cat doing a lot of sneezing while or after using the litter box, it could be because of the dust they’re breathing in.

The good news is that an air purifier can help with this. Most of them include a high-efficiency particulate air (HEPA) filter. These have an extremely fine mesh that removes everything from the air. This includes litter box dust.

If you’re worried about the amount of dust you see when you add new litter or even just clean out the litter box, you have a couple of options. You could switch to a dust-free litter, or get an air purifier to prevent that dust from going far. Remember that the dust will only be removed from the air, so an air purifier will help but can’t completely remove the dust from the litter that’s in the pan.

What Else Does an Air Purifier Remove from the Air?

Put simply, an air purifier removes everything from the air that isn’t air. This includes:

In the next section, we’ll go over the filter types available and cover exactly what they handle.

Let’s look at the three main air purification systems used by air purifiers. As you’ll see later in the reviews, many of these units have more than one of these to ensure everything you don’t want in the air is removed.

As we mentioned before, HEPA stands for high-efficiency particulate air. A true HEPA filter will remove everything from the air that’s bigger than 0.3 microns.

To understand what a micron is, get out your ruler and look at the metric side. The smallest unit should be a millimeter. There are 1000 microns in a millimeter. So, a HEPA filter can remove particles that are a fraction of the size of a micron. As you can imagine, there isn’t much that can escape one of these filters.

What will be important is replacing it as often as needed since once they’re full, they won’t be able to filter out anything else.

Activated carbon (also known as activated charcoal) is carbon that has been ground into a fine powder. What it does is physically bind to particles to trap them. These are often used in water filtration as they take everything from bacteria and other contaminants out to make it safe for drinking.

When used in air filtration, activated carbon does the same thing. It catches anything the HEPA filter may have missed, which often includes odor-causing particles in the air. These particles are too small to be caught by the HEPA filter which is why it’s recommended to have a carbon filter in place if you’re worried about eliminating odors.

There are some things, however, that even a carbon filter can have trouble holding onto, including microscopic organisms and viruses. For those, there’s a UV-C light. This light kills anything that may do you, your family, or your pets harm. It quickly sanitizes the air and can even reduce your chances of getting sick.

For the elimination of cat litter box odors, a UV-C light may be overkill since the carbon filter should take care of any of the ammonia particles that get into the air. However, if you’re also wanting an air filter to improve the overall air quality in your home, you may consider getting one that has this extra layer of purification.

Keep an eye out in the review section to see which of these each air purifier has so you can get the right level of protection for your home.

How Long Does it Take for an Air Purifier to Clean a Room?

The amount of time it takes for an air purifier to completely clean the air in a certain room depends on the unit itself and a few other factors.

Each unit is built to handle a certain amount of space. If you have it in a larger area than what’s recommended, it may still work but will take longer to keep the air clean. If you get a unit that can handle a larger room than where your litter box is, then it’ll make quick work of cleaning the air and will keep it clean.

We recommend using a more powerful air purifier rather than one that meets your bare minimum requirements. This is particularly true when using it to combat litter box dust as well.

Let’s take a look at the best air purifiers for eliminating cat litter box odors. As you’ll see, we’ve included information with each one about how quickly it can clean a room and how much space it’s designed to handle.

To pick the best air purifiers for litter smells, we picked ones that at least had a true HEPA filter. We also looked for ones that were silent so you can place it as close to your litter box as you’d like without scaring your cat. The last thing you want is for your cat to stop using the litter box because the air purifier freaks them out!

This is the most cost effective air purifier you can get. It has a 3-step filtration system yet costs about the same as some of the other units which only have one or two filters. The combination of these three filters will help keep your air clean so you can breathe easy.

The GermGuardian Air Purifier is excellent at removing odors so it’s great for use with a litter box. One reviewer noted that she couldn’t smell fish cooking in the next room thanks to her unit!

If you’re looking for an air purifier to take care of a whole apartment or small home, this may be the right one for you. It’s rated to take care of up to 1100 square feet of space. The only drawback is that it only has a HEPA filter, but it may still do an excellent job of cleaning your air.

One of the other biggest advantages to the Alen BreatheSmart Air Purifier is that even on its fastest speed, it’s still virtually silent. So, you can keep it as close to the litter box as you need without scaring away your cat.

As its name applies, this unit is designed to take care of allergens that may be in your air. Using a true HEPA filter, it can pick up nearly everything. In most cases, this will also include many of the odor-causing particles from your litter box.

As one of the most powerful small-sized air purifiers on the market, the Honeywell Allergen Remover could also be one of the fastest removers of litter box odors on the market as it completely filters all of the air in 465 square feet every 20 minutes.

For superb air filtration that’s also environmentally-friendly, consider this unit. It has a 3-step filtration system that ensures every speck of dust, odor-causing bacteria, and ammonia particle gets eliminated before it reaches your nose. Plus, you can set it on a timer so it’s not running continuously.

The Pure Enrichment PureZone Air Purifier also boasts a sound level of just 30 decibels, which is the equivalent of hearing someone whispering from six feet away. That’s also quiet enough that most cats won’t be bothered by it.

If you’re worried about the ozone-damaging UV lights in some of the other filters, you may want to get this air purifier. It skips the light and focuses on filtration through both a HEPA and an activated charcoal filter.

Because the LEVOIT LV-H132 Air Purifier only covers a small area, it works well if you have the litter box in a bathroom or other small room, or just want to keep the odors down by filtering the air near the litter box. Otherwise, you’ll want to look into one of the other units that covers a larger area.

This air purifier has several features that make it worth the extra expenses compared to other units. It has a washable carbon filter so there’s no need to continuously replace filters. Plus, it has an automatic setting that gauges the air quality and only comes on when it’s actually needed.

To save some money in the long run, consider getting the Winix 5500-2 Air Purifier. It also offers a silent filtration mode which would make it ideal for nervous cats.

This is another air purifier that only covers a small space. So, this will work best if the litter box is in a small room or you just want to eliminate odors by cleaning the air around the litter box. It also has an ion booster rather than a UV-C light which can help eliminate bacteria in the air.

The hOmeLabs Air Purifier is a great inexpensive option that will handle litter box smells without any issues. It’s also easy to set up, as all you have to do is take it out of the box, plug it in, and push a button.

Now you know how an air purifier can help you get rid of litter box smells. This way, you can enjoy your cat more without having to deal with the overwhelming odors that come from their bathroom.

If you want more tips to reducing odors associated with the litter box, be sure to check out our post on eliminating litter box smells. There, you’ll find a ton of actionable information that will help you keep those odors under control.

How Often do Cats Pee and Poop?

How Often Should You Buy a New Litter Box?

27 Litter Box Cleaning Hacks that Will Make You Go “Wow!”

How to Clean a Litter Box with Vinegar