You may have seen that people add baking soda to cat litter or had someone recommend it to you. But is that a good idea?

If you're looking for a cheap additive that can help reduce odors, you could give baking soda a try. Adding baking soda does not mean you can reduce the frequency of cleaning the litter box! Check your cat's reaction to make sure it doesn't bother her. If Kitty seems to complain, ditch the baking soda. 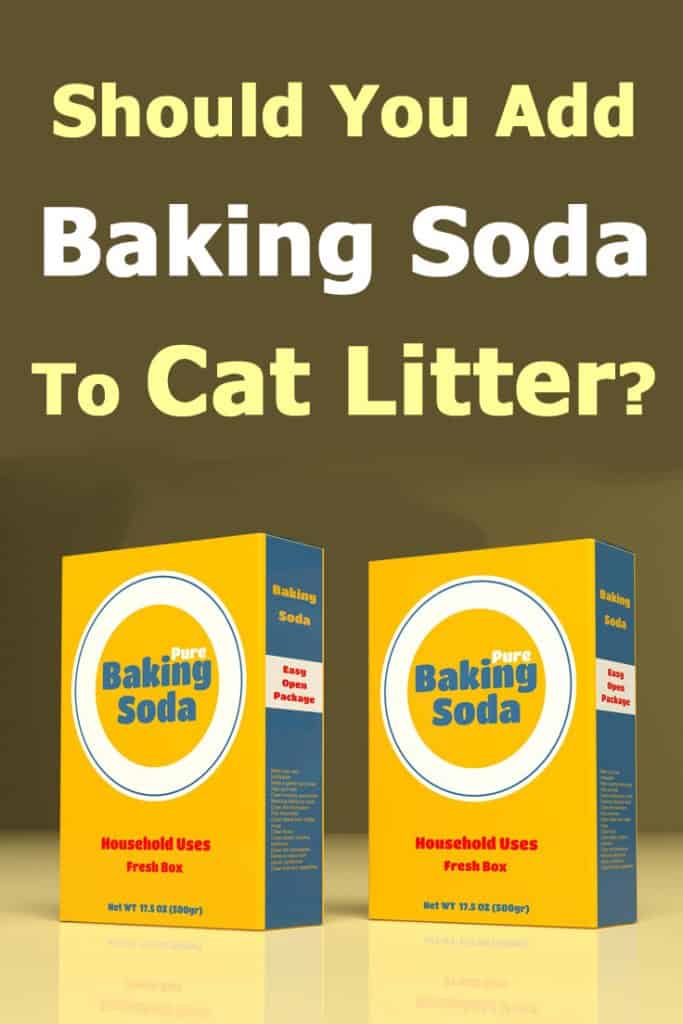 Wondering why some people swear by baking soda in the litter box? How does it actually work? What are the pros and cons of using it?

In this article, we’re going to answer all those questions and more!

What is Baking Soda?

Let’s start by looking at exactly what baking soda is.

Baking soda is sodium bicarbonate, an alkaline compound that reacts with acidic compounds to create carbon dioxide. It’s most commonly found as a white powder and can be purchased in nearly any grocery store.

Baking soda’s ability to react in the presence of heat is why it’s used frequently in baking. As it reacts, it leaves those little air bubbles in the dough which makes the dough rise even when there’s no yeast present. Without it, cakes and pancakes would be flat and heavy.

But what does this have to do with cats and litter boxes?

One of the other properties of baking soda is that it absorbs odor. This is why people add it to cat litter. It eliminates - or at least greatly reduces - litter box odors so you don’t have to smell them.

For most people, the biggest downside of having a cat is the litter box. It's not only the chore of cleaning the box - though that is annoying in its own right! - it's the odor that can be felt around the box.

It's important to note at this point that in principle, the litter box should not smell. It should simply be kept clean enough so that there's nothing in it that can produce bad odors. However, life sometimes means you can't clean the box 2-3 times a day, as you should. And that's where odor build up can be especially bothersome.

By using baking soda to reduce odors, that part of cat ownership can become more bearable. This is especially true for people with sensitive noses or multiple cats.

Here are some of the benefits you can gain by using baking soda in your cat’s litter box:

Let's break down these advantages, one by one.

As we already mentioned, the first way using baking soda in the cat box can help is by reducing odors. As your cat uses the litter box, it absorbs the smells so they’re not released into the air where you’re stuck smelling them.

Baking soda may also make the litter box easier to clean when you’re completely emptying it for a deep cleaning. This white powder is a gentle but tough abrasive. Plus, it’s safe to use because it won’t leave behind harmful chemicals for your cat to touch.

And if you're looking for other natural substances for the task, check out our post about using vinegar to clean the litter box.

It can also help you save money on other forms of odor control such as air fresheners, candles, and so on. Baking soda is cheap and fairly easy to find in bulk if you want to save even more money on it - here's a link to buying 5lbs of Arm & Hammer baking soda. Buying in bulk also ensures that you’ll always have it on hand.

Another reason that people choose baking soda over scented litters is that it may work better.

Cats have sensitive noses which can cause them to avoid using a litter box that smells too strongly of anything. Baking soda simply removes the odor without leaving a strong scent behind.

Scented litters may also be potentially dangerous for cats because of the chemicals they contain. Baking soda, on the other hand, is only dangerous in if eaten in extremely high amounts. This limits the possibility of any harm coming to your cat because of what’s in their litter box.

Works with All Types of Litter

Whether you have clumping or non-clumping litter, baking soda will work. It can even work with pellets. That means you can reap all of the other benefits on this list without worrying about switching litters. All you have to do is pick up some baking soda and start using it!

There are some drawbacks to using baking soda in your cat’s box, which we’re going to take a look at here. It’s important to keep these in mind when considering whether or not you want to do this.

Can Deter Cats from Using the Litter Box

If you use too much baking soda or it works too well, it can make it difficult for a cat to recognize where they’re supposed to go. Cats do need their litter box to smell at least a little like their waste as this lets them know where they should do their business.

Some cats are also particular about the feel and look of their litter. These particular cats could be turned off by the addition of baking soda. In this case, you will want to make sure to only add it to the bottom of the box to prevent this potential issue. You should also start with a small amount and work your way up to including more.

Could Make You Clean the Box Less Often

Another problem you may encounter is that you’ll forget to clean the litter box since you’re not smelling it. The biggest concern of this is that your cat is less likely to use the litter box if it gets too dirty. So, you may end up finding waste around the house because the box is full.

A simple way to avoid this pitfall is to create a reminder on your phone so you’ll continue to regularly remove waste from your cat’s litter box. This will ensure that your cat will always have a clean litter box to go in.

Will Adding Baking Soda Help You?

It’s important to realize that adding baking soda won’t help reduce smells in every case. If your litter box smells because the box itself is dirty, then you may need to replace that first. Plastic can get scratched and absorb smells which allows the offensive odor to linger even when new litter is added.

One of the other reasons the litter box may have a lingering odor is they’re simply not being cleaned out often enough. This happens more often in a multiple-cat household. If you have more than one cat, you may need to get a few extra places for them to use.

As long as you keep the litter box clean, baking soda can help you reduce odors associated with owning a cat. It’s one of a few things you can do to reduce litter box smells along with regular cleaning and replacing the litter box.

Can Declawed Cats Use Clay Litter?

Cat Litter with Glade? Check out these novel products!

How Often Should You Clean a Litter Box

Cat Litter Substitutes – 10 Things You May Have Never Considered