Even if you prefer a solid large long-lasting litter box for your cat, you may still need a disposable box as a backup or emergency option for when you take in that stray cat. Some people just like using disposable litter boxes because 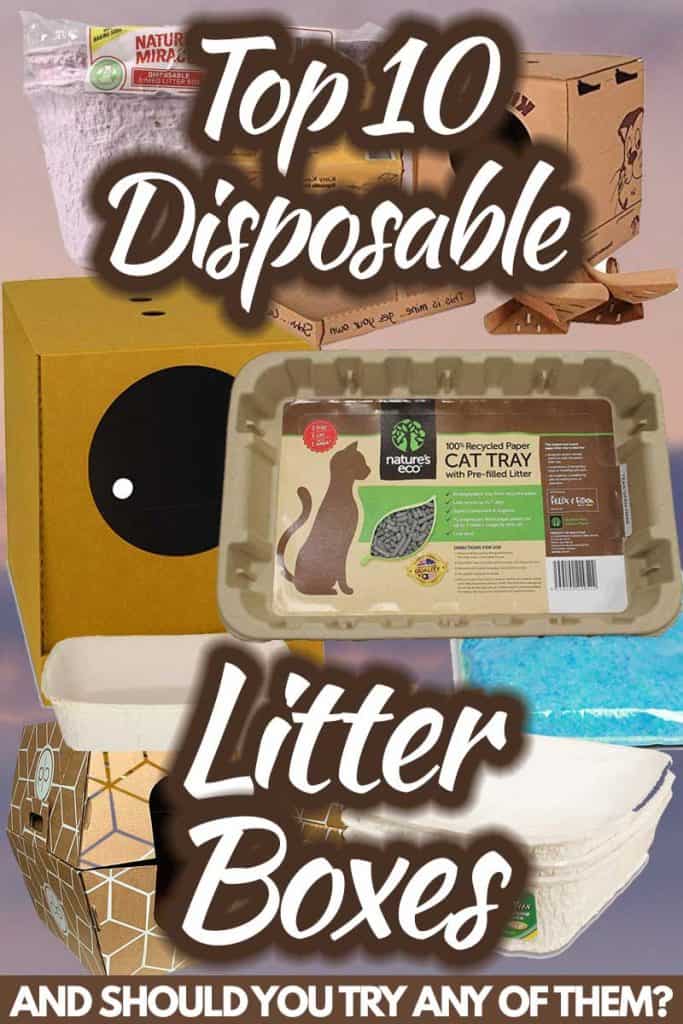 they can easily be thrown away and replaced with a new box.

While you will be scooping the litter on a daily basis, you can at least avoid the task of cleaning the box itself. How much of a chore is that? Just check out our post about how often to clean a litter box to find out.

Just remember, even with a disposable box, you should still clean the litter on a daily basis. There's no justification for putting your cat through a dirty litter box even for a day or two. Plus, it's a good recipe for house soiling problems.

And if you're worried about ecological issues, don't. The disposable litter boxes in this list are made of paper or carton so they are bio-degradable by nature.

Now that we’ve explained the basics of disposable litter boxes, let’s share some of the top picks for your perusal. Here’s 10 to get you started.

For bigger kitty cats with larger litter box needs, there’s Nature’s Miracle jumbo box. An Amazon’s Choice product with high ratings to boot, you can get sets of two, three, or four at a time on Amazon.

These boxes go with any type of litter, whether you prefer the store-bought stuff or more natural alternatives. This leak-proof, shed-proof box has a recycled paper base. If it ends up in a landfill, it should biodegrade naturally. Yes, you’re still helping Mother Nature with a product like a disposable litter box.

Nature’s Miracle includes baking soda in each jumbo box to combat ammonia smells and other stinky odors. The box weighs 2.75 pounds and measures 21 inches by 15.2 inches by 7.8 inches.

This cat tray from Felix & Fido has a base made completely from recycled paper. With each Amazon order of the boxes, you get five trays that should last you about seven days each. The pores in the disposable box have capillaries that absorb liquids and thus prevent odors from spreading.

You even get your own paper litter with your purchase. With less tracking and better absorbency, this litter also has no bleaches, additives, or chemicals. It’s good for your cat and the environment.

To use your Felix & Fido disposable box, just take off the perforated lid and place the box down in kitty’s favorite spot. They’ll take care of the rest.

If you like the Nature’s Miracle box we showcased above but you feel a jumbo size is a little excessive for your cat, don’t distress. The brand also makes a regular-sized disposable litter box. This one measures 17.1 inches by 12.6 inches by 6.4 inches. You can get a single pack or a three-pack through Amazon.

Everything you love about the jumbo box comes back for the regular-sized version. That includes its recycled paper base, baking soda inclusion, and leakproof properties.

The appealing look of PetSafe’s disposable litter box stands out from the other entries on this list thus far. It compacts and collapses so it takes up less precious room in your home. To get the box ready for your cat, you simply use the finger holes to pull up the retractable sides. There’s a front flap with tabs you should secure in the slots to keep the box upright. When fully assembled, the box measures 16.4 inches by 12.6 inches by 14.5 inches.

You get crystal litter included with your order by paying a little extra. This PetSafe litter promises less odors compared to clay litter, with five times the odor-blocking capabilities. The privacy hood and elevated entrance of the disposable box will prevent your cat from tracking that crystal litter all over the place.

The box has a wax coating that keeps leaks at bay. You even get a disposable scoop with your purchase. To assemble it, follow the perforated lines, folding as needed. Then you can clean up!

Although LitterMaid’s disposable box doesn’t look like much, it’s an inexpensive, suitable pick for most kitties. You can get a three-pack or even a 15-pack with one order!

You may use any type of litter with LitterMaid’s box. It will keep those especially pungent bad smells away. Measuring 17.1 inches by 12.4 inches by 6.2 inches, most mid-sized cats should fit inside the box with no difficulty.

If you liked the style of the PetSafe disposable box above, then wait until you get a load of the Kitty Kan. This disposable box comes with a cat bed and four scoops for cleaning up messes. The cat bed is made from open flute cardboard sure to become a favorite of your kitty.

This box is 16 inches tall, 13.5 inches wide, and 16 inches long. It biodegrades thanks to the recycled cardboard used for the Kitty Kan. Instead of it sticking around for one week, you can keep your disposable box for up to two. Leak-proof and durable, you’ll quite enjoy the little sayings printed on the sides of the box. These include “this is mine…get your own” and “shhh…cat napping.”

A mid-sized solution available in packs of three, Kitty’s WonderBox will replace your standard plastic box for good. You won’t need any disinfectants with this box thanks to the paper base’s pH levels. These prevent ammonia from reeking up the place. There’s also an included air filtration system for fewer odors.

You can use each WonderBox for a month or less if you wish. They’re shred-proof, tear-proof, and leak-proof, even with big bathroom messes. The recycled paper breaks down with time so you can feel good about choosing this litter box for your kitty.

Why does Ace Innovations call their product the 10-second litter box? That’s how long it’ll take you to clean the box. With a coating that resists water damage, this cardboard disposable box has a cute grass pattern on all four sides. It also comes with carrying handles for transporting the whole thing to your curb or local recycling center.

Non-clumping litter works especially well with this box, says Amazon users. Most cats can fit, even if they’re fully-grown adults. This box is a bit heavier than some of the other options we’ve covered, as it’s 7.87 pounds.

If you do have a heftier feline friend, then try this large disposable box from Easyology. Not only does it have the width bigger cats need, but the height as well. Each box measures 17.5 inches by 15.5 inches by 5.5 inches.

Not only will your kitty appreciate the size of this disposable box, but you will, too. If you have to clean up messes before throwing the box away, you’ll find the open design quite handy for that less than desirable job. Those messes will stay contained in the box, by the way, due to the waterproof qualities built right in. The box is also anti-leak and traps odors so they can’t travel across the house.

The litter goes pretty deep into the box, about two or three inches down. By keeping the litter this way, the included tray lasts longer. Any litter works for this Cat’s Desire disposable box, so have at it.

Inside the disposable box, there’s a barrier that prevents moisture from soaking through. The top doesn’t have to stay on the box if you’d prefer to leave the setup open. Since everything is made of cardboard, you have plenty of versatility.

What are the benefits of disposable litter boxes?

Basically, they save you on having to replace the entire amount of litter and scrub out the box. You still need to scoop daily but once it's time to replace the litter, you just toss out the entire box and place a fresh one instead.

Also, they are cheaper than regular boxes. This means they can be a great solution for temporary foster situations.

Where can I throw away my disposable litter box?

Since most disposable litter boxes break down over time, you should be able to throw them out with your regular trash. As we’ve mentioned, these boxes shouldn’t linger in landfills for the next several years.

You might also try recycling your disposable litter box. However, due to the nature of what the box is used for, not all recycling centers may accept it. Always call and ask before you just dump the box off.

When throwing your litter box away, put it in a double-strength trash bag by itself. Never toss the box on the curb for the poor garbage person to deal with. If you recycle your box, you’ll definitely want to clean it out as well as you can before bringing it to the recycling center.