Tackling a question that comes up from cat owners today. Let's see if we can help you figure out the mystery of why your cat may be scratching the sides of his or her litter box - and what to do about that. There can be several reasons for this type of behavior - each one should be addressed in a different way. Sometimes, scratching the side of the litter box is an important clue that can help you figure out what's bothering Kitty - and improve the cat's quality of life. 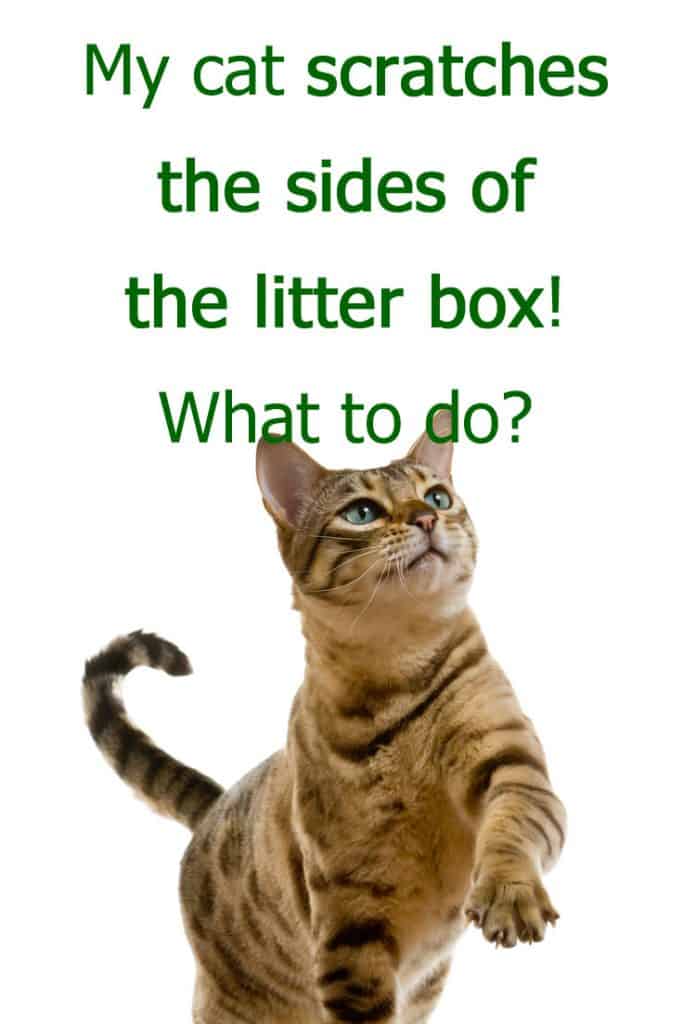 Why does my cat scratch the side of the litter box?

House cats are relatively small and usually sweet. I can be easy to forget that their wild ancestors had a very different life. In the wild, cats are ferocious predators but - and this is the important part here - if they aren't careful, they can also become prey.

This is why it's so important for cats to be able to hide their oh-so-pungent waste products. Any cat owner knows that cat urine is detectable from far away. Cats instinctively know to bury their waste to make it harder for predators to locate them.

Back to our fluffy pet cats

While house cats do not have to deal with the problem of predators and larger cats coming to find them, the instinct to bury and conceal their waste products is still strong. After a cat uses the litter box, they feel an intense need to cover their waste so that the scent is undetectable to potential predators.

There are a few different reasons why this instinct can cause a cat to excessively scratch the sides of their litter box.

A cat may scratch the sides of their litter box if there is not enough litter to cover their waste. Each day, you scoop out some of your cat's litter when you clean the box. This is unavoidable, especially with clumping litters.

Over time, this causes the litter level to go down. When a cat feels that their waste has not been sufficiently covered by litter, they will begin to scratch the sides of the box, looking for more material to cover their waste so that they can cover up the smell.

Of course, scratching the side of the box will not actually produce more litter for the cat to use, so their attempt is futile. When a cat feels that they cannot sufficiently cover their waste in the litter box provided, they may begin to search for a new place to go potty, such as a pile of laundry or a sandbox (every cat owner's worst nightmare).

A box that isn't clean enough

There are some other reasons that a cat may scratch the sides of the litter box.  Kitty may be overwhelmed by the smell of the box, and try to excessively cover their own waste products. This happens when the litter box is not cleaned often enough. Cats like for their living areas (including the litter box) to be extremely clean, and they are prone to behaviors such as box-side-scratching if the cleanliness of the box is not up to their standards. 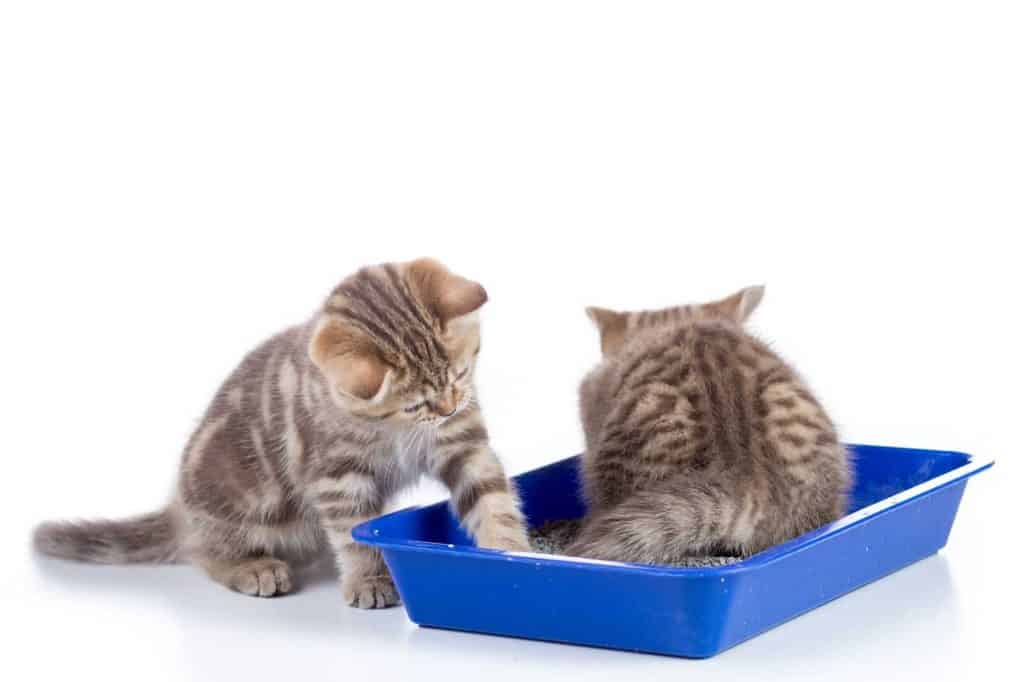 Litter getting stuck in Kitty's paws

The type of litter being used can also cause the cat to scratch the sides of the box. Clumping litter is great, but it has the potential to get stuck on a cat's paws. If, when covering his or her waste, a cat gets litter stuck to their paws, they may scratch the side of the box in an effort to remove the uncomfortable litter clump from in between their little toes. This is especially likely if you have a long or medium-haired cat with lots of fur on the bottom of their paws.

How can I stop my cat from scratching the sides of the litter box?

Now that you have an idea of why your cat is scratching the sides of the litter box, it's time to help them stop! There are many remedies that will help your cat stop this behavior. Remember, not all cats will respond to the same things, so if one of these ideas doesn't work, simply move onto the next one. If you've exhausted a variety of ideas and nothing has worked, it's always a good idea to take your cat to the vet for a check up. Strange litter box behavior can be indicative of a health problem, and it's better to be safe than sorry. 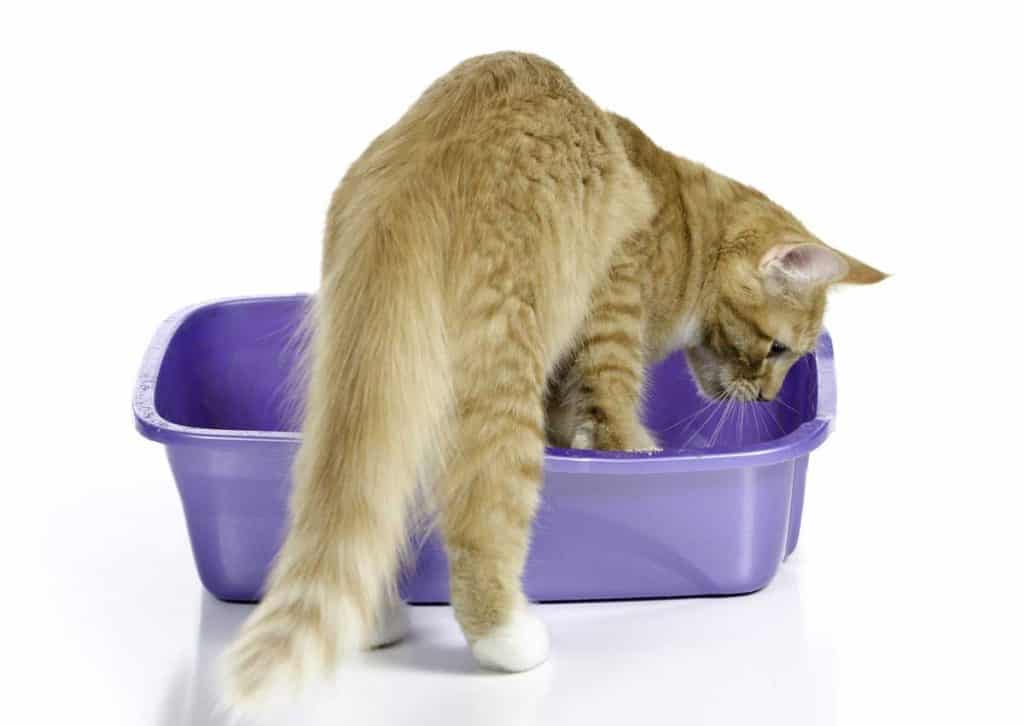 Get a larger and deeper litter box

First, try getting your cat a deeper litter box that can hold more litter. As mentioned above, scratching the sides of the box is often due to the cat needing more litter in order to cover their waste. A deeper box lends itself to your cat having more litter available to cover up their waste. Of course, it's important that you fill the larger box with more litter, instead of the same amount that you used to put in the more shallow box.

Whenever there is a change in the house (especially when that change involves the cat's litter box), it's important to calmly show the cat the change, and celebrate after they do their business to reinforce this behavior. When you see your cat use the new litter box, let them know they did a good thing by giving them head scratches, a treat, or some catnip. This will encourage your cat to repeat the same behavior. Also, immediately scoop the waste out of the litter box so that your cat is encouraged to enter the clean box again.

More than one cat? Have enough boxes for everyone

It's imperative that you have enough boxes for all the cats in the house. If you're having any litter box avoidance or other litter box related issues, the general rule of thumb is to have one box per cat and then one more. Also, make sure you have at least one box per floor of the house. You never want your cat to have to go too far to use the litter box. You can skip floors (such as the basement) to which the cat does not have regular access.

If you notice that your cats seem to frequent one box in particular, take note. See if you can figure out a reason why they're using this box. Is it near a window? Unobstructed by furniture? In a dark or quiet place? Try to replicate this environment with the other litter boxes so you can cut down on undesired litter box behavior, such as scratching the sides of the box. 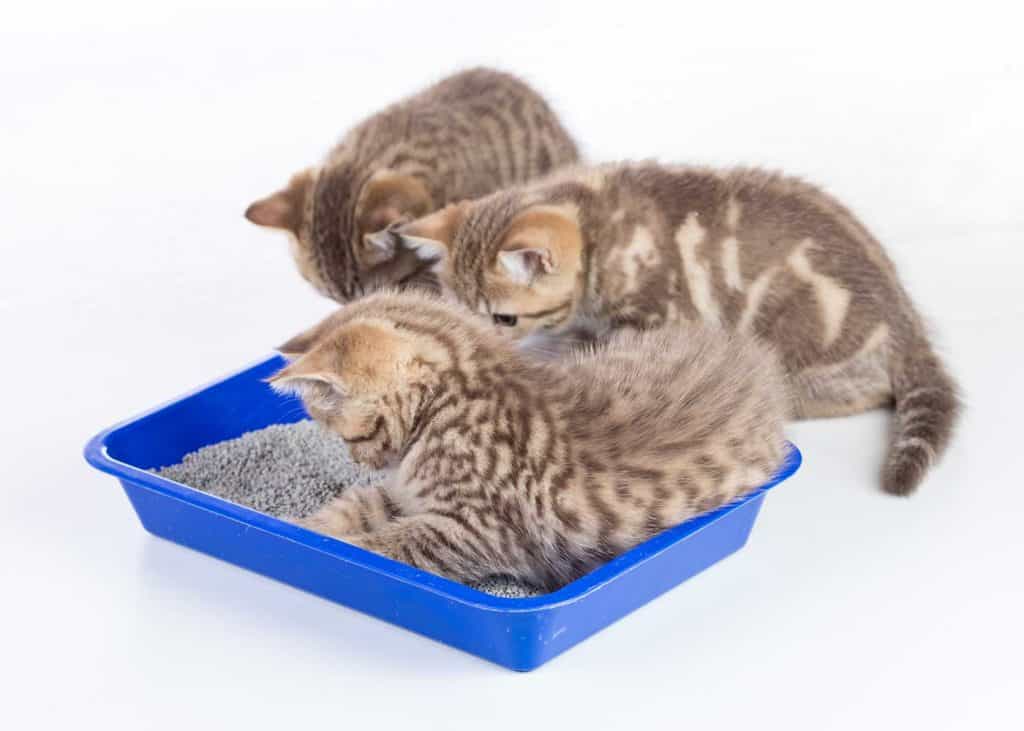 Read more: How many litter boxes per cat should you have

Read more: Where to put the litter box? A concise room-by-room guide

Remember, no matter how many cats or boxes you have in the house, it's key that you keep all of the boxes very clean. Scooping out all boxes twice each day (once in the morning and once at night) is a great start if you're trying to prevent issues like scratching the sides of a litter box. Read more here about how often you should clean the litter box.

In addition to scooping the waste out of the boxes, it's important to change the litter entirely. Your personal circumstances (number of cats, size of litter box, frequency that cats use the box) will determine how often this needs to happen. Changing the litter entirely can make sense anywhere from every other day to once a week.

When you change the litter, do not simply dump it out and put new litter in the box. You'll want to scrub the box out with a pet-safe cleaner (available at your local pet supply store), dry the box entirely (otherwise clumping litter will stick to the interior of the box, likely creating more scratching), and then fill with litter.

Proper ventilation is also key for helping your cat feel that their litter box is clean. While it can be tempting to place the litter box in a closet or bathroom to keep it out of sight, these areas can easily get smelly, causing your cat to feel like their waste is not properly concealed, which can lead to more side of the box scratching. The best thing that you can do is place the box in an open area and keep it as impeccably clean as possible. 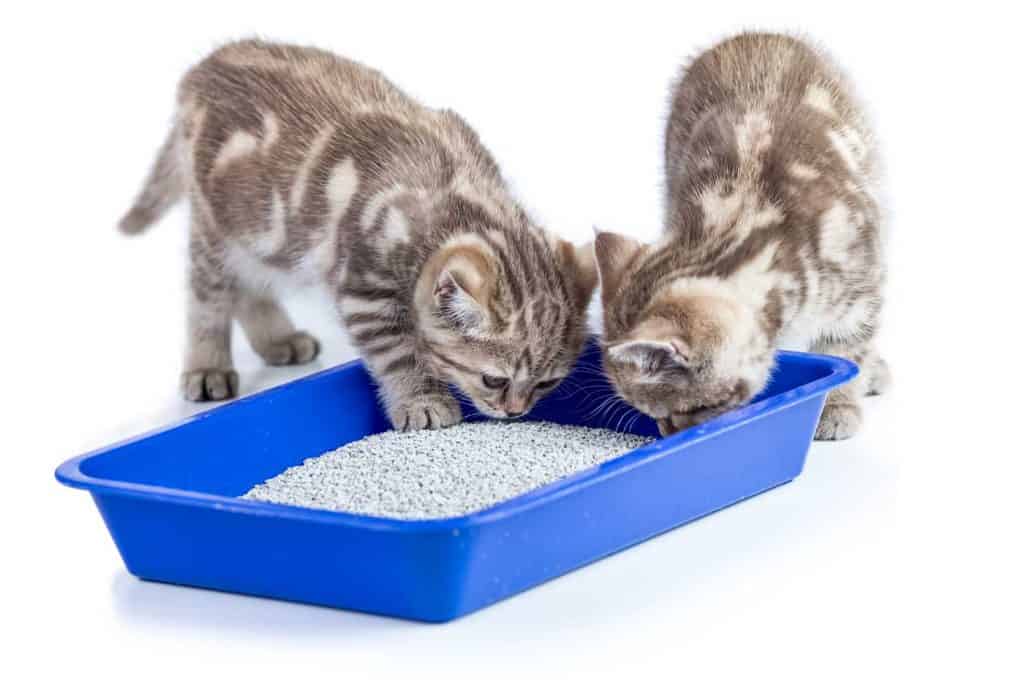 Changing the type of litter your cat is used to is kind of a big deal. Don't do this "just because". That's why it's the last suggestion on this list.

If you suspect that Kitty scratches the sides of the box to get rid of clumps of litter that got lodged in his paws, then - and only then - is a litter change relevant to this issue. How can you tell? Take a closer look. When you hear the scratches across the plastic, gently and slowly get close enough to take a peek. Can you see litter dropping off the paw when the cat scratches?

Once Kitty is out of the box, is there excessive tracking? If your cat doesn't mind, try to gently raise one of the front paws (they ones used for digging) and see if you can see a lot of litter. Some tracking is acceptable and will happen with any type of litter. However, if you're seeing clumps stuck to the paw, there may be more of a problem.

As always, if you consider changing the type of litter you use, research carefully before making a decision. Then make the change very gradually. Introduce the new type of litter into the box to fill up the level of litter lost during scooping. That means a small amount at a time - making for a gradual change of litter. 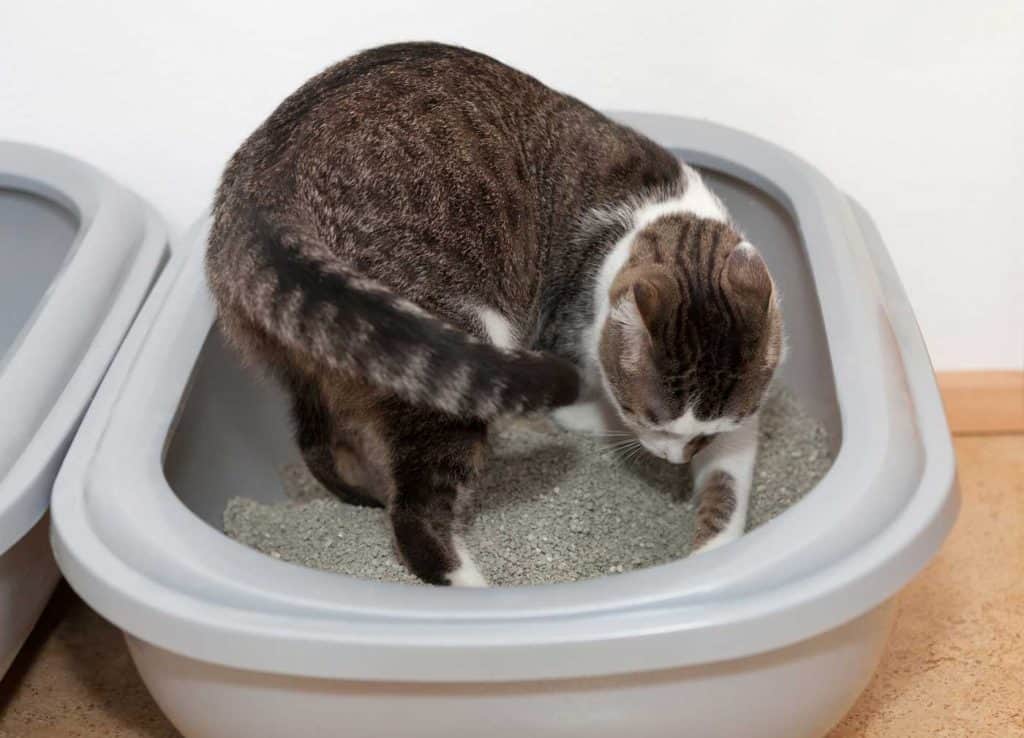 In the end, cats have all kinds of behaviors that are unique to them. If your cat formed a habit of scratching the sides of the litter box and nothing seems to change that, just let it go. You should only do something about it if you suspect it's a symptom of a problem.

You now know what the potential problem may be -

Each of these is a problem that does need addressing. Especially the first. If you don't your cat can end up avoiding the litter box altogether - which is far worse than just scratching the sides of the pan.

However, if you've made sure the box is clean, has enough litter and there are no "paw issues", let Kitty scratch. It may just be one of the quirks unique to your cat and that's just purrfectly ok.

Best Litter Box Attractants (And Should You Use One at All)

How To Remove Clumping Litter From Cat’s Paw

How Soon Can A Kitten Safely Use Clumping Litter?

30 Hidden Litter Boxes You Should Check Out