A friend or family member has recommended coconut litter to you. You’ve already tried all sorts of cat litter for your kitty: clumping, non-clumping, even silica gel crystals, and recycled paper. So what is this coconut litter now? Should you give it a try? We did extensive research to bring you the answer. 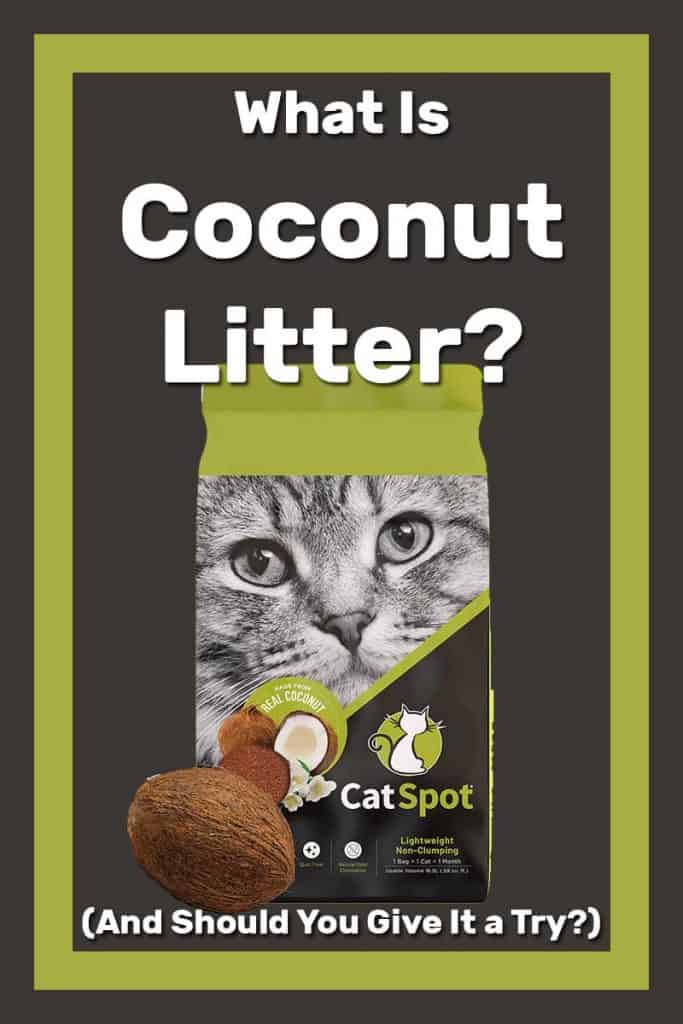 Coconut litter, made from coconuts, is an eco-friendly option with no added scents. It has good urine absorption qualities but cannot mask ammonia odors for long. It also contains no dust.

If you’re curious about coconut cat litter, then you don’t want to miss this article. We’ll explain more about what coconut litter is as well as share the pros and cons. If you’re eager to buy some for your feline friend, we’ll even provide you with Amazon shopping links.

What Is Coconut Litter?

As we mentioned in the intro, coconut litter is a cat litter option that comes from coconuts. Manufacturers use the husks of coconuts to produce this litter. A coconut husk is considered renewable, as the coconut palms remain unscathed by sourcing the husk for other purposes.

If you want to compost your cat litter, you could if it’s made from coconuts. You’ll also like that it naturally breaks down with time. You’re doing your part for Mother Nature by choosing a smart type of cat litter like this, then.

Coconut litter feels almost like dirt. It’s somewhat fluffy, too. Since your cat probably already uses a sand-like litter, getting them to adjust to a coconut-based litter shouldn’t prove too challenging. They’ll love that they can dig around a little before they do their business.

What Are the Pros and Cons?

Now that you have a basic understanding of coconut litter, you may wonder what makes it so good? Also, what are the downsides of moving to this type of litter? Let’s get into a discussion of the pros and cons now.

Where Can You Buy Coconut Litter?

Do you want to give coconut litter a whirl and see how your cat reacts to it? If so, then there’s really only one brand around: CatSpot.

It’s an Amazon’s Choice product and gets high marks from other retailers like Walmart as well. CatSpot uses only coconut for its litter and no other ingredients.

According to CatSpot itself, coconut has an amazing ability to store a high capacity of liquid, more than the coconut itself weighs. In fact, per its own weight, coconut will retain 560 percent more liquid, which means greater absorbency.

A single CatSpot bag that weighs five pounds produces the same amount of absorbency as a clay litter bag that’s 20 pounds, the manufacturer notes. If you wanted to flush CatSpot coconut litter after your cat has used it, you can without clogging up your toilet. Remember, coconut litter doesn’t clump. That said, the brand recommends not dumping “the bulk of the waste” and putting solid waste in the toilet only.

In each bag (the standard size is five pounds), you get 0.65 cubic feet or 18.34 liters of litter. It should last about a month. On Amazon, you can order up to two or three bags at a time, so you can get several months of litter at a clip.

If it’s been about two weeks since you put the litter in your cat’s box, CatSpot says you can take it out and compost it in a bin, flower beds, or your backyard. Other means of removal include the above-mentioned flushing and simply tossing the stuff out.

Should You Use It for Your Cat?

Is coconut litter a viable option for your cat? Absolutely! If you’re looking for a new type of litter, then coconut litter could be just what you need. It’s certainly worth using at least once. If your cat doesn’t like it (or you don’t), then you can say you tried it.

While you’ll pay somewhat more for a bag of coconut litter compared to more traditional cat litter types, as we said in the last section, a bag of CatSpot should last you about a month. You’ll get good value for your money, then.

Cats can get sick of their current litter, necessitating a change. Sometimes, the unnatural fragrances of their litter deter them from making waste in the box. Coconut litter doesn’t smell like anything, so it has that going for it. There’s no fruity, topical smells to worry about here.

You should keep the downsides of using coconut litter in mind going forward. Without clumping capabilities, you’ll have to make sure you use a scooper without holes as you clean up. Otherwise, the soiled litter will just fall right back in the box.

Speaking of cleaning up, you’ll do it a lot more often. That ammonia smell will fill your nostrils and your home, making it unbearable. Also, prepare to clean around the litter box as well. As you recall, the particles of coconut litter aren’t non-stick. Your cat will trail the litter as they leave. It doesn’t get stuck between their toes, though, so it doesn’t end up in your living room or bedroom.

You and your cat might grow to like coconut litter better than what you’re currently using. If so, then great! If not, then you at least know it doesn’t work for you through personal experience.

Coconut litter comes from the husk of coconuts. It’s non-clumping, non-smelling, biodegradable, compostable litter. The only brand on the market that produces this type of litter is CatSpot. Their five-pound bag can last you a month.

While there’s both pros and cons to using coconut litter, we don’t think you should necessarily discount it before trying it. Good luck!