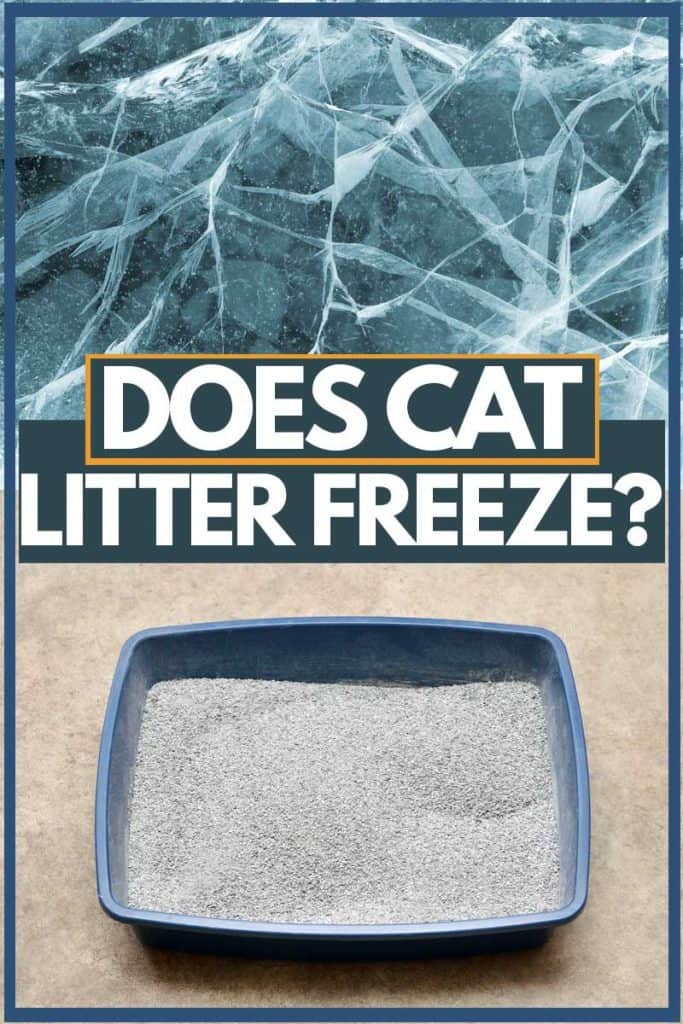 Winter weather affects not only people but their pets as well. For many cat owners living in areas with cold winters, the changing seasons can require changing the location of your cat litter box as well. If your litter box is generally in an unheated area, such as a balcony, garage, or patio, you may be wondering how it will be affected by the onset of cold temperatures. More specifically, many cat owners are asking if cat litter freezes. We’ve researched several cat litter types, and their propensity to freeze in cold temperatures and have compiled this guide for your reading pleasure.

In general, cat litter will not freeze into one solid chunk as long as it is clean and dry. Cat urine and feces introduce moisture into the litter, and as such, can lead to cat litter freezing. The following list outlines some of the most common types of cat litter and their likelihood to freeze:

Clumping litter is not only the most popular type of cat litter in general, but it may also be the best for cat owners worried about their cat litter freezing solid. Clumping cat litter is manufactured with aluminum phyllosilicate clay bentonite, which causes the cat litter to clump together when absorbing moisture from pet waste. This clumping action will stop or slow the spread of moisture throughout the entire litter box, localizing the moisture absorption in one spot.

As cat litter can only freeze solid when it encounters moisture, the clumping action which stops the spread of moisture will prevent the entire litter box from freezing. Additionally, clumping cat litter is typically very absorbent, and as such, can hold a lot of moisture from pet waste without transferring it throughout the entire box.

You can find clumping cat litter on Amazon here.

Non-clumping clay-based litter is, quite obviously, manufactured with clay. The original form of cat litter, non-clumping clay-based litter, is usually more absorbent than clumping litter. Once the litter has absorbed enough moisture from pet waste, it could freeze solid if ambient temperatures drop sufficiently. Due to the material nature of non-clumping litter, this type of litter can typically remain unfrozen for longer periods of use versus clumping litter. The downside to the materials, however, is that because this type of cat litter will not absorb moisture in clumps, it will instead tend to distribute it more evenly throughout the litter box. As such, the entire box of cat litter is more likely to freeze than when using clumping litter.

Provided you change the cat litter regularly before it becomes completely frozen solid into the box, non-clumping clay-based litter can be a fine choice for winter weather.

You can find non-clumping litter on Amazon here.

Silica crystals litter is another type of popular cat litter. This cat litter contains sodium silicate sand. Using a unique manufacturing process, the granules are created to have a very high rate of moisture absorption. The extreme absorption capacity of this type of cat litter can make it an excellent choice for cat owners concerned with dropping temperatures. Due to this absorptive ability, silica crystals litter will be able to be used by your pet or pets for a long time before you should have any concerns about it freezing solid. However, like all cat litters, with enough added moisture, silica crystal cat litter can eventually freeze solid.

One crucial consideration to keep in mind when using silica crystals litter is that it is especially important to ensure you are filling the cat litter box to the appropriate depth. If the layer of cat litter is not deep enough, the cat’s urine could seep to the bottom of your litter box instead of being absorbed by the granules. In winter temperatures, this unabsorbed moisture would be likely to freeze rapidly, making tricky business out of cleaning your cat litter box. However, when used properly, silica crystals cat litter is a great choice for winter weather.

You can find silica crystals litter on Amazon here.

You can find biodegradable litter on Amazon here.

Now that we’ve gone over the most common types of cat litter and their likelihood to freeze, let’s examine some additional questions you may still have.

How to Properly Store Cat Litter?

Cat litter should be stored in a cool, dry location to prolong its shelf life and subsequent usability. After opening a bag of cat litter, you should be sure to securely fasten it shut until the next time you plan to use it. Leaving an opening, even a small one, can allow for moisture to enter the bag and ruin your cat litter. Nobody wants to throw away a bag of cat litter they only used once!

Can You Put a Litter Box in the Garage?

You can put a litter box in the garage, provided your cat has easy access to go in and out of the garage itself. You can read more about proper cat litter box location here.

Does Cat Litter Help With Traction on Ice?

Cat litter can help with traction on ice, in the sense that any dry, granular material will increase traction in slippery conditions. For this reason, cat litter is often included in a list of items to keep in the car while driving in winter conditions. Cat litter will not, however, melt ice or snow, and as such is no replacement for road salt when circumstances call for it.

How Do You Use Kitty Litter in the Snow?

Kitty litter can be used to help temporarily increase traction in snowy conditions, either for walking or driving. Cat litter can be especially useful when trying to get a stuck vehicle freed from ice or snow. To use kitty litter in the snow, simply spread several generous handfuls on the walking path or under your car’s tires in the direction you are attempting to drive.

For cat owners who have their litter boxes outside or in a space where animals can come and go, you may be wondering about other issues that come with having your litter box in such an area. Check out our guide on whether cat litter attracts predators to learn all about the safety of outdoor cat litter.