We may get commissions for purchases made through links in this post.

Being a cat owner only comes with a few downsides. Incorporating a litter box into your home would top this list as it can cause a lot of frustration. Some people even wonder whether these boxes will attract bugs into their homes. We’ve done extensive research into this topic and found an answer that’ll provide an idea about what to expect.

Your cat’s litter box does attract bugs, as certain ones love to feed on the feces found inside these boxes. As a result, it’s not uncommon to see them flying around or inside the litter as you’re cleaning out the box. 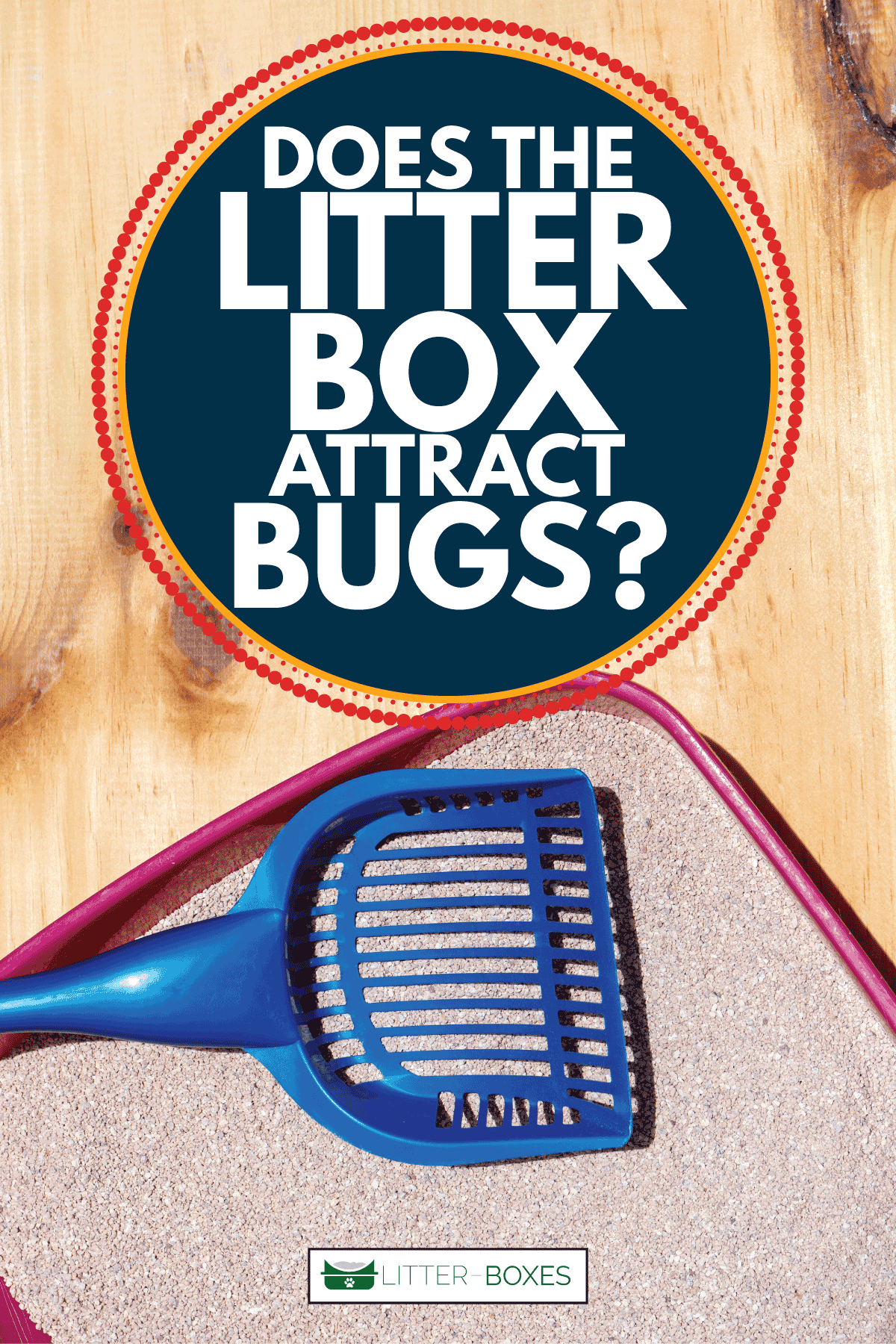 What Bugs Are Attracted to Cat Litter?

The number of bugs that are attracted to cat litter is almost endless. Here’s a quick list of what bugs might find their way into your cat’s litter box:

Each of these pests finds cat feces appetizing and might be found consuming the waste material. But the most likely culprits will either be fruit flies or fungus gnats. Both are known for their liking of damp places, which describes a litter box or scooping container perfectly.

Your chosen litter type could also be an attractive element. Cat litter made with organic matter like grass clippings or corn are known attractants to gnats and fruit flies. Tiny moths will infest these litters, which often leads people to mistake them as gnats or flies.

Bed bugs are one pest not known for living in cat litter for various reasons. For instance, each cat litter type was made to stay dry and get cleaned every day. These two qualities ensure a litter box becomes unattractive to bed bugs since these pests reside in a cool environment.

Silica-based cat litter is even harmful to bed bugs, as it can dry out their exterior. It then makes them vulnerable and exposed to air, which causes the bugs to dry out and die. As you can imagine, it’s a key component of why bed bugs keep away from litter boxes.

Some people use silica-based litter as an effective tool in eliminating bed bugs from their homes. You can grind it up and place it into crevices/cracks where these pests reside. You’ll soon find any issues with these bugs to be a thing of the past.

Bed bugs also need to have their habitats near the host. Cats use their litter box multiple times during the day, but they don’t hang out there for an extended period. Your cat will instead finish their bathroom business and leave the box to rest elsewhere. It isn’t enough time for the bugs to make a suitable home in your cat’s litter box.

How Do I Keep Bugs Out Of My Cat’s Litter Box?

Keeping bugs out of a litter box doesn’t require much effort. The following tips should ensure these pests don’t make your cat’s litter box an all they can eat buffet.

The most obvious preventative measure would be keeping your litter box clean. But if the infestation has already started, an excellent place to begin would be emptying the container, then scrubbing it clean using detergent and warm water.

Once it’s cleaned, place a little less litter than usual into the box. It’ll allow you to clean it out easier and keep the litter inside a lot more fresh. We recommend having separate litter boxes for multiple cat households to prevent an overload of waste from attracting even more bugs.

Candle traps are an effective, simple way of stopping these pests from becoming an issue. You need to light a candle and place it inside a water-filled container. From there, turn out the other lights in the area and place the trap near your cat’s litter box.

The trap should attract these bugs to its flame, which will burn their wings. Some might get sucked into the flame’s reflection, get too close to it, and find themselves stuck in the water. Adding a few drops of dish soap would be an effective way to ensure an escape isn’t possible.

People with some old, rotting fruit inside their homes can use it to eliminate fruit flies. Place the gross piece of fruit into a container, cover it with plastic wrap, and jab a few holes into it. This trap will attract the flies into it while not giving them a way out.

Use a Vinegar Trap

If the candle or rotting fruit trick isn’t working, some of your kitchen supplies can create a genuinely effective trap. Start by getting a container, such as an old bowl, and adding warm water to it. Proceed to mix in some sugar, a little apple cider vinegar, and a bit of dish soap.

Stir the mixture until it’s entirely combined and set this container on a ledge or shelf near the litter box. But please, make sure your pet can’t reach it. This trap should be effective almost immediately, as it’s common to see a massive number of dead gnats within one day.

But you’ll need to keep replacing the solution every couple of days. If you don’t have vinegar, there are a few alternatives options that could have similar results: beer, wine, or any sweet fermented liquid.

Commercial fly traps are an extremely efficient way to combat severe infestations. Hang a few from the ceiling where they’re low enough to catch those fruit flies but high enough to keep them away from your cat. These traps should make those pests disappear quickly.

Bug zappers are usually used for killing more giant insects, such as mosquitoes. But if you have one, it wouldn’t hurt to place it on a shelf near your cat’s litter box. You might get lucky, and a few gnats find their way into the zapper.

It isn’t uncommon to see a few ants crawling inside or around a litter box. An ant’s attraction to these boxes stems from the scent of cat urine. Pet owners with diabetic cats tend to have this issue more than most because they have more bathroom trips than other cats.

If you have an excessive ant issue, it would be wise to schedule a vet visit because of the diabetic problem. But an ant infestation could also be a result of using bio-degradable litter when your cat has no underlying medical issue. Try switching litter types, and those ants should adventure elsewhere.

Spiders themselves aren’t attracted to cat litter, but you might see them inside the litter box. A spider might adventure into a litter box because there could be insects within it that they want to eat. Therefore, if you don’t keep your litter box free of bugs, a creepy spider will likely make its way into the box.

Roaches are about the last thing a person wants to see inside their cat’s litter box. But these vile creatures will infest one because they’re attracted to anything dirty. In other words, the litter box themselves don’t attract roaches, but the soiled litter and type of litter inside them sure do.

Like other pests, bio-degradable litter made from organic matter (wheat, pine, corn, etc.) can be a roaches’ food source. You’d be better off sticking with a silica-based or clay-based litter to avoid these problems.

If you have any more questions about bugs and cat litter, let us know in our comment section. We’ll make sure to respond as soon as possible. Thanks for reading our article!

6 Kinds of Cat Litter with Charcoal

Where to buy a Litter Box? (Top 40 Online Stores)

How Often Should You Buy a New Litter Box?

Where Can You Hide the Litter Box (and Should You)?