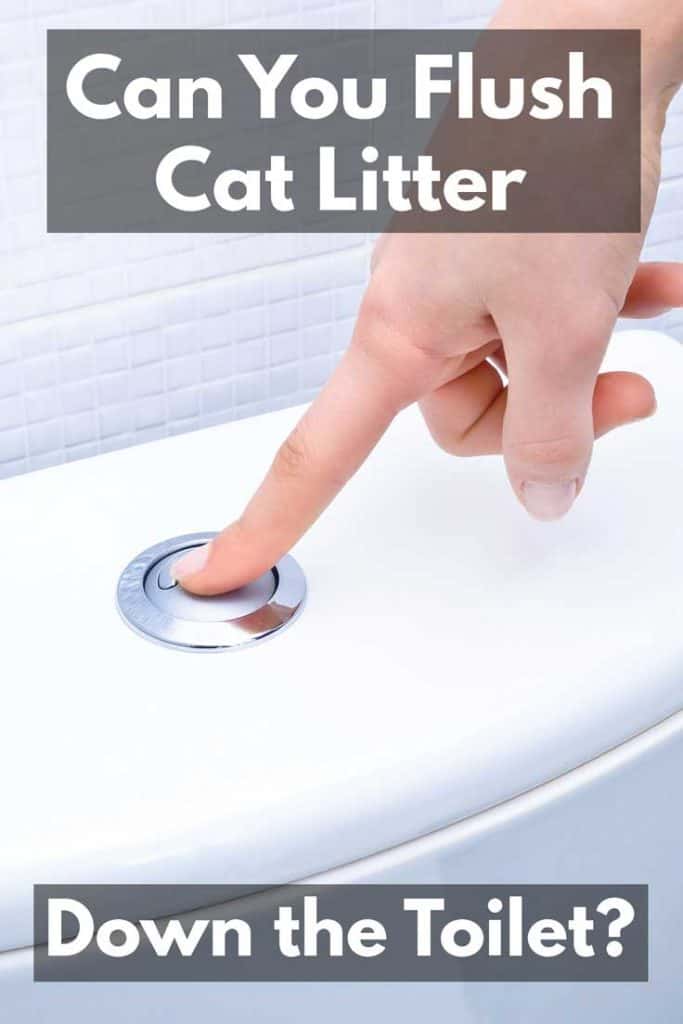 Keep reading to find out more about what happens when you flush cat litter, and why you shouldn’t flush it, even those that are supposed to be flushable.

Many cat litters are clay-based. If you flush these, they’ll wreak havoc on your sewage system and could end up costing hundreds or thousands of dollars to replace clogged pipes. This is particularly true of clumping cat litters.

Clumping litters are great for trapping urine so it can be easily removed with a scoop just like solid waste. This type of litter clumps when it comes into contact with water. So, if you throw it into your toilet, it will form clumps.

When there’s enough of this clumped cat litter in your pipes, it can cause a blockage that won’t budge no matter how much water you throw at it. Chemical clog removers aren’t designed to deal with this type of blockage, which is why you’ll end up having to call in professionals to solve the problem.

You may think that using a flushable cat litter would solve the problems created by clumping clay litter. However, as you’ll soon see, these can cause a number of other problems. Here are a few of them:

Cat waste and the litter itself won’t break down as they should in your septic system. Over time, this can cause it to overflow or become damaged. To avoid needing to replace your entire system, you’ll want to find another way to dispose of used cat litter.

Processing at Water Treatment Plants Can Be a Problem

For many of the same reasons we mentioned above, cat litter should not be flushed if your pipes are connected to the city’s sewage system. Water treatment plants are not set up to handle animal waste or the various materials in flushable cat litters.

Although you may not be directly affected by this, but the workers at your local sewage treatment plant will certainly appreciate it if you only flush your own waste and toilet paper.

Toilets Are Not Designed for Hard Waste

Toilets are designed for human waste, which contains more moisture than cat waste. Cat’s waste dries out quickly and can become hard after only a few hours.

Because toilets weren’t made to handle these hard bits of waste, they can become clogged easily. When litter is added to the mix, it only makes it worse.

Even Flushable Litter Can Cause Clogs without Enough Water

Flushable cat litter is heavy, much heavier than anything that’s supposed to go in toilets. As such, it can be hard to keep it moving without large amounts of water.

Although you might be ok if you have an older toilet, all newer toilets only use 1.6 gallons per flush. This just isn’t enough to maintain the momentum of the cat litter so it goes all the way through the system. If it doesn’t keep moving, it will cause clogs.

By far the biggest reason not to flush any type of cat litter is parasites. Because this is such a huge problem no matter what kind of litter you have, we’re giving it its own section.

Cats are the host of a parasite known as Toxoplasma gondii. It causes a condition called Toxoplasmosis and may affect up to 40 million people in the United States alone. Because there are few symptoms, most people are unaware they have this infection.

Typically, only people with compromised immune systems and pregnant women are in serious danger when contracting this parasite. However, this parasite doesn’t only affect humans. Wild animals can also get it, particularly otters.

What does this have to do with flushing cat litter?

When you flush cat litter, you may also be flushing this parasite with it. Water treatment plants and septic systems aren’t designed to destroy this parasite, so it can get into drinking supplies, or find its way into nature where it can infect wildlife.

For this reason alone, you should never flush your cat’s waste down the toilet.

Why Are Some Litters Advertised as Flushable?

With the knowledge you now have about the dangers of flushing cat litter, you may be wondering why there are so many litters that are being advertised as flushable. It’s all about marketing.

Companies that manufacture cat litter want to solve your biggest problem so you’ll be more likely to buy their products. Since a common issue of cat owners is what to do with used litter, they try to resolve that by making cat litter flushable.

However, just because something can go down the toilet, doesn’t mean it should.

A ping-pong ball can fit down the pipes of your toilet, but that doesn’t mean it should be flushed down. Imagine what would happen if every person in America flushed just one ping-pong ball down the drain. Sewage treatment plants across the nation would be shut down to fix the problem.

This is similar to what would happen if every cat owner in the United States flushed all of their cat litter down the toilet all the time. The system would be flooded with waste that couldn’t be processed by the plants.

Companies can write pretty much anything they want on their packaging. That includes labeling something as “flushable” even if they don’t know for sure if septic and water plant systems can handle it.

If you don’t like the idea of throwing away your cat’s used litter to rot in a landfill, here are a few other alternatives to flushing your cat’s litter.

What do cats do with their waste in the wild? They bury it. As long as you’re using a biodegradable cat litter, you can bury your cat’s litter in your backyard. Be sure to bury it a few inches below the surface so it doesn’t work its way back up.

If you use a natural cat litter such as sWheat or World’s Best Cat Litter, you can compost it. Keep in mind that it needs at least 18 months to be completely safe to use on food crops, so you’ll likely need two large bins for composting cat litter.

Make sure you do your research before jumping into composting cat litter. We found this article helpful.

If you have holes or low spots in your yard, adding cat litter to them can help you fill them. For this type of project, it’s generally better to use a clay-based cat litter since the natural types will break down over time, and you’ll have to keep filling them.

Read more about how to properly get rid of cat litter.

While you may be inclined to buy flushable cat litter because of how convenient it sounds, the truth is that you shouldn’t flush cat litter down the toilet. Even though it can go down, that doesn’t mean it should.

All types of cat litter and cat waste can cause plumbing problems in your own home, a septic system, the water plant, and the environment. With alternatives such as composting or burying your used cat litter, there’s no need to flush it.