Single cat owners often find themselves wondering one simple question, how many litter boxes is enough? It's a common thought for new and experienced owners, which tends to many different answers. But we've done extensive research into the topic and found a definite one capable of quelling your concerns.

The right number of litter boxes for a single cat would be at least two. If you live in a larger home with multiple levels, you should adopt a one or more per floor motto. Senior cat and kitten owners should have more than two litter boxes as they're more prone to bathroom issues.

However, there's a bit more to the discussion than this simplified answer. Our following sections will take you through several related topics to ensure all your questions get covered. We'll help make sure your cat has the best litter box setup possible! 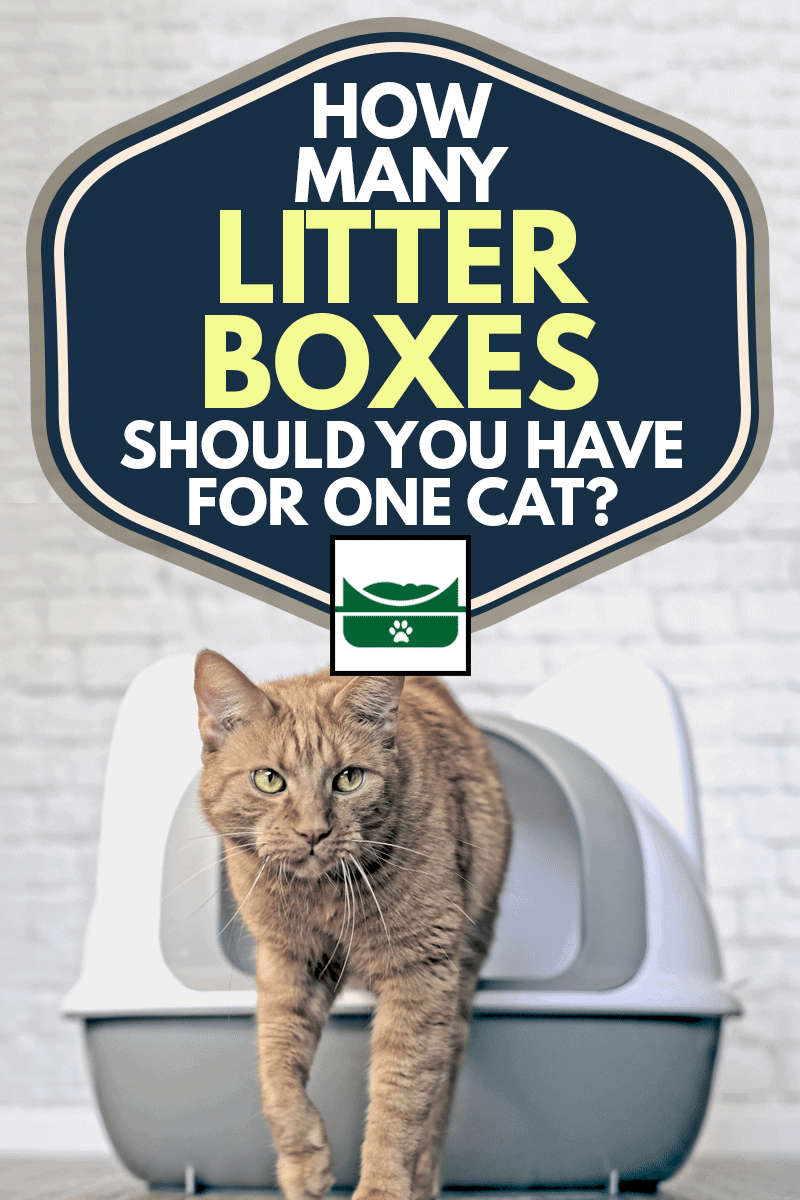 Why Your Cat Needs Two or More Litter Boxes?

There are several reasons why having two or more litter boxes is a good idea for a single cat household. In fact, experts often recommend cat owners follow a one litter box per cat, plus an extra, philosophy. Some exceptions do exist to this guideline, such as a larger home should have at least one box per floor.

But most people find the two litter box policy a more than an adequate method of dealing with their cat's bathroom needs. Here are a few explanations for why this rule is worth following:

More Options to Choose From for Their Bathroom Business

Owners who utilize more than one litter box have the advantage of trying different approaches. For instance, you could try different litter types in each box to see what they like more. It'll help create a more comfortable bathroom experience for your favorite cat.

Another useful experiment would be trying out different litter box types. You can put a covered litter box in one room and an open option somewhere else. It'll then be simpler to determine what one works best for your cat.

As a result, you'll no longer find yourself wasting money on an undesirable box or litter type. It's an outcome that could make your life as a cat owner much more manageable.

Their Litter Boxes will be Cleaner

If there's more than one litter box, your cat should spread out their bathroom business. It'll make sure each box ends up cleaner than when only using a single box. This situation tends to make cats a lot happier than a one litter box per cat setup.

After all, they'll be relieving themselves in an immaculate box twice a day. A single litter box would only offer this pristine condition one time. Of course, this information is based on an owner who's cleaning them every day.

Owners Won't Have to Clean as Frequently

Cat owners won't have to scoop as frequently as with a single box setup. In other words, a single box would usually require scooping out twice per day: you'd only need to do it once with two litter boxes. But don't take this statement as a reason to get lazy with cleaning these litter boxes.

It's essential to clean them out at least per day, which is a lot easier to do with an established cleaning routine. We recommend doing it at night before going to sleep. This action will make sure your cat has a clean box for their morning bathroom visits.

Allows Them to Avoid Using an Undesirable Litter Box

Cats will sometimes avoid using a particular litter box. It's a situation, which often tends to baffle and perplex their owners. But the usual reason behind their avoidance is something spooked when using it. One of the most common suspects would be another pet, such as your dog causing a raucous.

Thus, having a second litter box will give them a second place for their relieving themselves. It's a huge deterrent to prevent them from having a bathroom accident in an undesirable location. Honestly, this second litter box might be the only capable of stopping them from urinating on your carpet.

Should Litter Boxes Be Next To Each Other?

Putting two litter boxes next to each other isn't very helpful for a single cat household. It'll only make them consider the entire area a massive litter box, which will lead to issues like marking outside their boxes. You'd be much better off spreading them out throughout your home.

These multiple locations will help keep a single room from becoming a stinky nightmare. Cat litter boxes don't provide the most pleasant odor, but two can be unbearable in one space. The area will become inhabitable to any human with a working sense of smell. 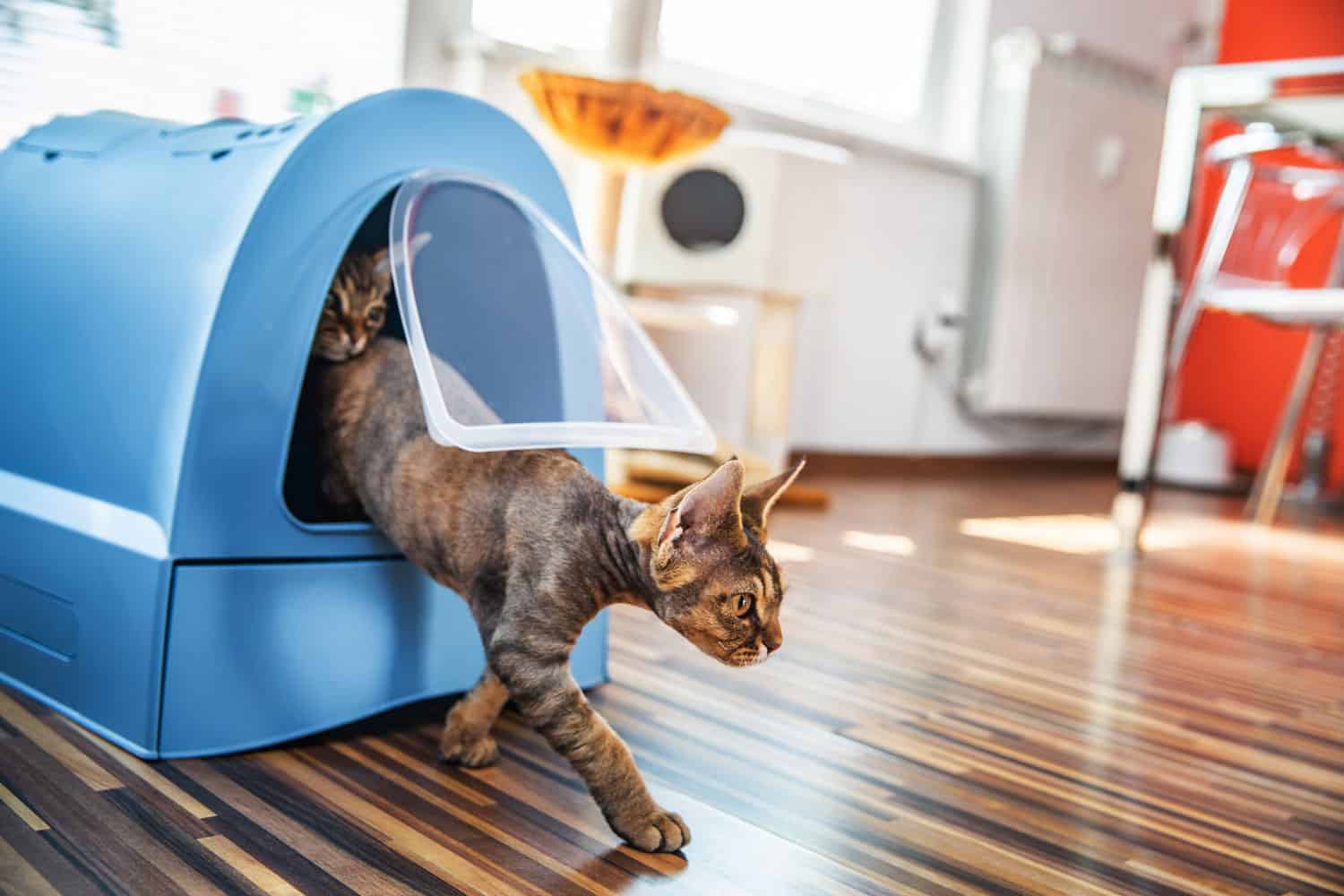 In most cases, cats don't have much of a preference when it comes to open or closed litter boxes. But the ones who are a little pickier will usually lean toward open litter boxes. The main issue with them not using their particular boxes often comes down to cleanliness.

Most cats won't think twice about whether a litter box is open or closed, as long as it's clean. It would be best to worry more about a box's size, cleanliness, and litter being used inside it. These factors can significantly impact a cat's comfort and prevent elimination problems than litter box type.

If you're looking for a bit more detail, this article tackles the topic more thoroughly. You'll find everything a cat owner could want to know about the open vs. closed litter box debate within it.

Where Should You Put A Cat's Litter Box?

Specific locations will negatively or positively impact your cat's willingness to use a litter box. It would help if you avoided the following situations when choosing your litter box spots:

Cats are known for their excellent eyesight. But it doesn't mean these animals want to use the bathroom without some light. Honesty, a well-lit area can increase a cat's comfort with a particular bathroom location.

It's essential to do everything capable of increasing their comfort. Cats tend to feel exposed and vulnerable when taking bathroom visits. A dark corner or closet will only make those feelings worse.

Owners with smaller homes tend to have few choices when placing their cat's litter boxes. But even these people need to do their best and avoid locations with loud noises or high foot traffic. A few examples would include a foyer or kitchen where there's always something happening.

3. Placed Near an Appliance

You might find a perfect spot for these boxes, but notice there's an appliance right next to them. Don't assume these devices won't bother your cat when they're using the litter box. Cats are overly sensitive about the conditions surrounding their respective bathroom areas.

Certain appliances can have a negative impact on their experiences, such as washers or dryers. Their loudness can startle a cat and make them never want to return.

4. Next to their Water and Food

If their food and water are near their litter boxes, cats aren't going to be happy. You can't blame them as it's quite gross when you think about it. Nobody wants to combine their bathroom activities with eating their dinner, not even your cat.

5. Don't Place Them Far Away

As you know, cat owners with multi-level homes should make sure litter boxes available on each floor. But it's crucial to have the highest number of boxes on the level where the cat spends most of their time. In other words, it would be smart to place two litter boxes there instead of one like on those other floors.

It's always tempting to put litter boxes in the garage or basement, as well. But some cats don't enjoy the isolation and darkness within these areas. Neither of these locations ends up being very convenient for them. You'd be better off designating a room on each floor for their bathroom activities.

If you're looking for more detail about specific locations, this article has got it covered. It'll discuss each potential area's pros/cons, along with several other topics related to litter box placement.

Can Cats Find Their Litter Box In The Dark?

As I mentioned earlier, cats have good nighttime vision. These animals should have no trouble finding their litter boxes during the wee-hours or when the lights are off.

But refrain from making them unless it's necessary. We recommend keeping a light on within their litter boxes areas even when it's late at night. It'll provide them with comfort and confidence to relieve themselves without worrying about any potential issues.

We hope our discussions on everything litter boxes answered all your questions. But if one or two still come up, let us know in our comment section. We'll make sure to post a response as soon as possible.