Cat owners have been trying to figure out the perfect litter box setup for years. One common question is, what's the right amount of litter needed inside a litter box? We've done extensive research into this topic and found an answer capable of quelling your concerns.

The right amount of litter will depend on your cat's personality and behaviors. But a good starting place would be spreading a 4-inch layer of litter in their box. You should then adjust this baseline on few different factors, such as box size, type of litter, and your cat's digging habits.

Our next few sections will detail how these factors can change the right litter amount to use. These discussions will help you create the perfect litter box setup for your favorite cat or cats! 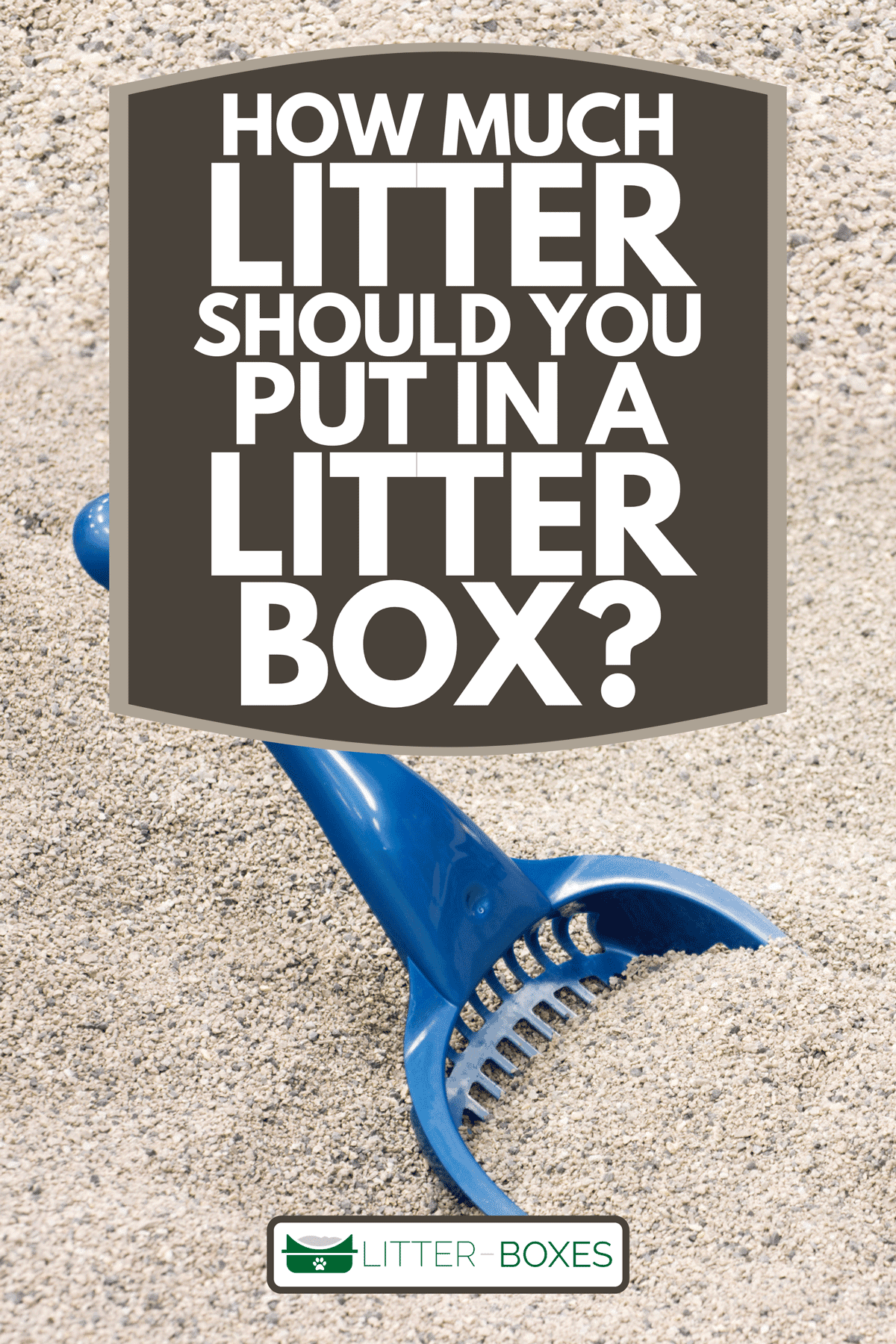 How To Determine The Right Amount Of Cat Litter 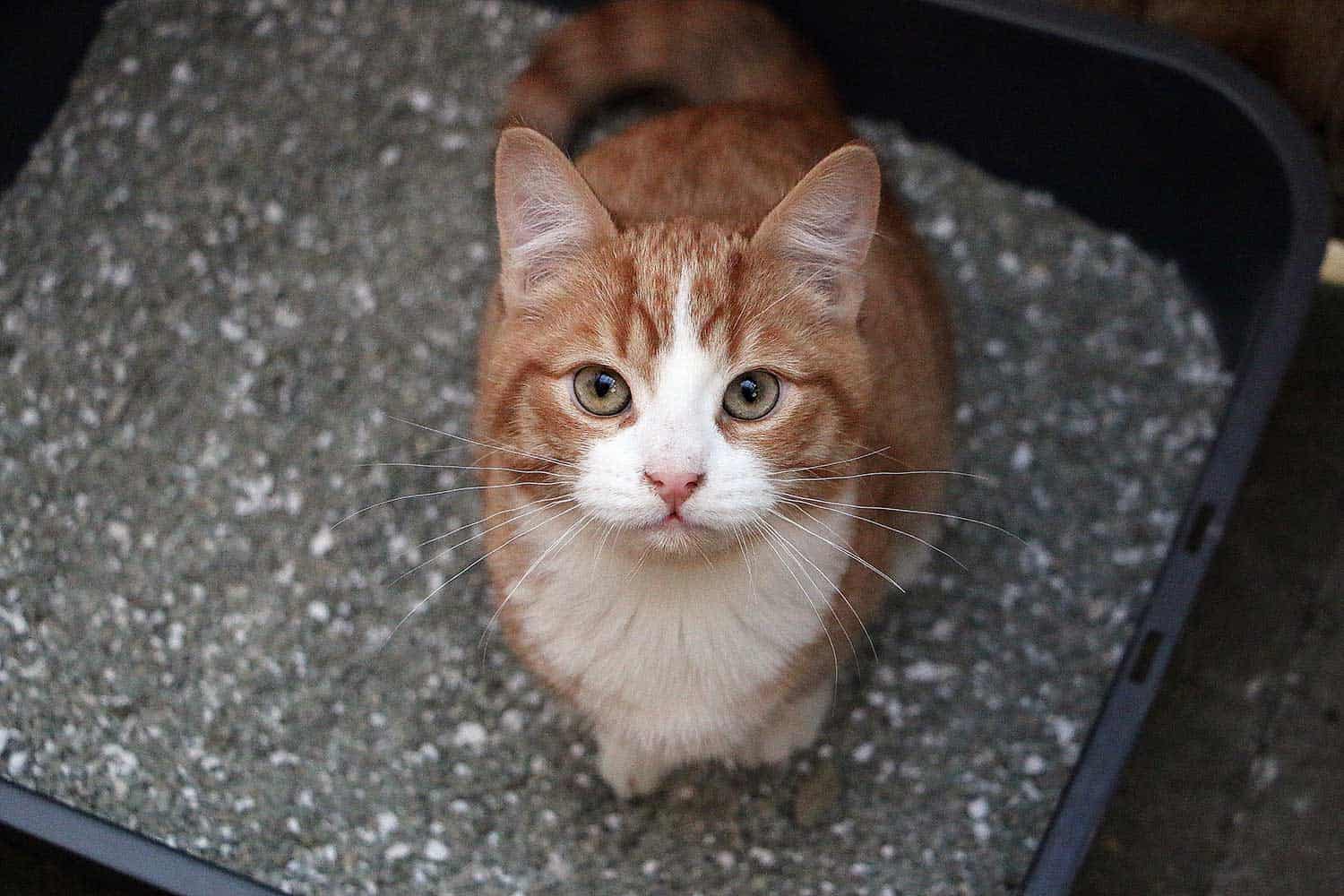 As mentioned earlier, the right cat litter amount will depend on your cat's personality. There are a few factors at play to discuss before deciding about the perfect litter amount. Let's dive into these aspects below and find the ideal solution for your situation.

Your first challenge will be figuring out what type of litter to use. In most cases, this decision will come down to answering whether your chosen option clumps or doesn't clump. Clumping litter tends to be the most popular option among cat owners because of how easy it makes scooping.

After all, clumping options contain a substance called bentonite that absorbs urine to create a solid lump. This action will leave the rest of the litter uncontaminated after these clumps formed. Scooping then becomes a process of taking out both hardened urine lumps and feces with your trusted scoop.

If you decide to use clumping litter, 3 or 4 inches should be a fair amount. It'll provide enough litter for digging without having too little an amount where you have to change the box frequently. Meanwhile, non-clumping litter users can get by with 2 or 3 inches because of their absorption properties.

Non-clumping litters allow urine to sift through and absorbs some of the awful odors via certain additives: charcoal or baking soda. Due to this, owners will only need to scoop out feces while the urine dries up within the litter. Changing the entire box is the only way to clean urine from it, which you should do at least once a week.

Each cat has a different mindset when it comes to digging within its litter boxes. Some will take their digging very seriously, demonstrating a willingness to dig toward the box's bottom. But others won't do a lot of it during their bathroom sessions.

Owners with a cat who loves digging require more cat litter than those who don't. In these situations, most experts recommend sticking with 3 or 4 inches of litter for deep scratchers. It'll help prevent your cat from digging to the bottom of their litter box.

If you have an infrequent digger, one or two inches of clumping litter get the job done. You'll have to stay accountable by scooping multiple times per day rather than standard one or two times. But it could help issues like litter tracking or cats kicking the box's contents outside its designated area.

Some cat owners like using covered litter boxes or trays with higher sides. These containers allow owners to use more litter inside their boxes because there's more containment. As a result, litter making its way outside the box will become a lot less likely.

If you're using a covered box or tray with high sides, we'd recommend going closer to 4 inches rather than two or three inches. It'll offer all the benefits of having more litter without any downsides, such as tracking or kicked litter. But open containers with low sides should try to limit their litter amount as much as possible.

It's the only way to ensure the entire outside area doesn't become littered with pieces of discarded litter. The amount of 2 or 3 inches should help keep these issues to a minimum.

Can You Put Too Much Litter In A Litter Box? 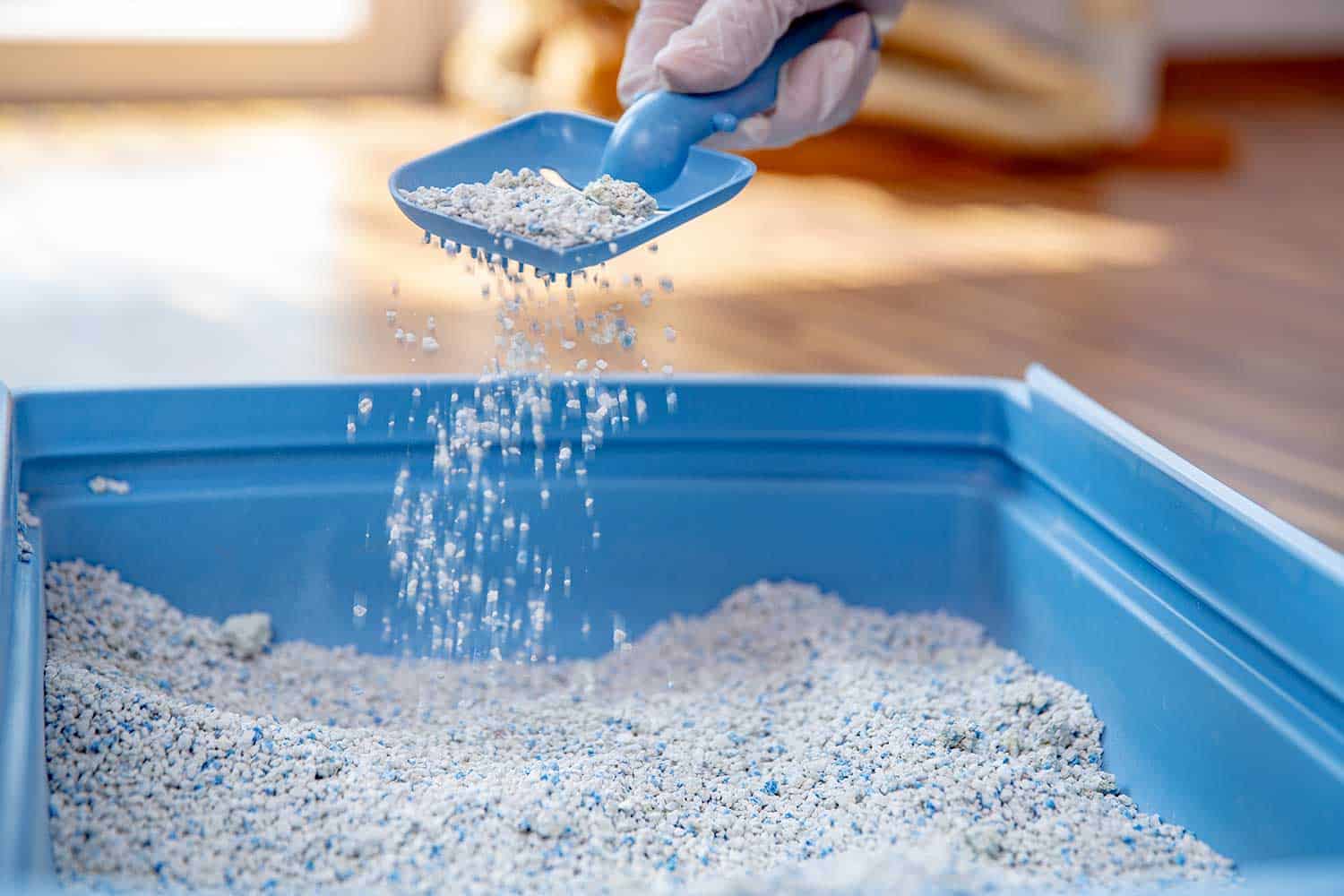 Putting too much litter into these containers is entirely possible. Several issues arise from this mistake, such as litter being tracked throughout your home. You might even see this situation occur when using a covered box with too much litter.

Note that using more than necessary is rather wasteful. After all, you'll still need to empty the litter and scrub your litter box regularly. Using more won't get an owner out of cleaning or scooping the box. Here a few signs to look out for that could indicate there's too much litter in the container:

Your Cat Slips In The Litter Box

Take a look at your cat when they're doing their next bathroom visit. It may seem gross, but cats aren't shy about doing their business, and it's essential to determine whether there's an issue. Your cat should appear steady and confident when using their box.

But if they seem off-balance or shaky, these issues could indicate that there's too much litter. The excessive amount is causing the ground to shift under their feet. It's easy to imagine how uncomfortable and unpleasant that experience would be for your favorite kitty.

Your Cat Only Goes In Halfway 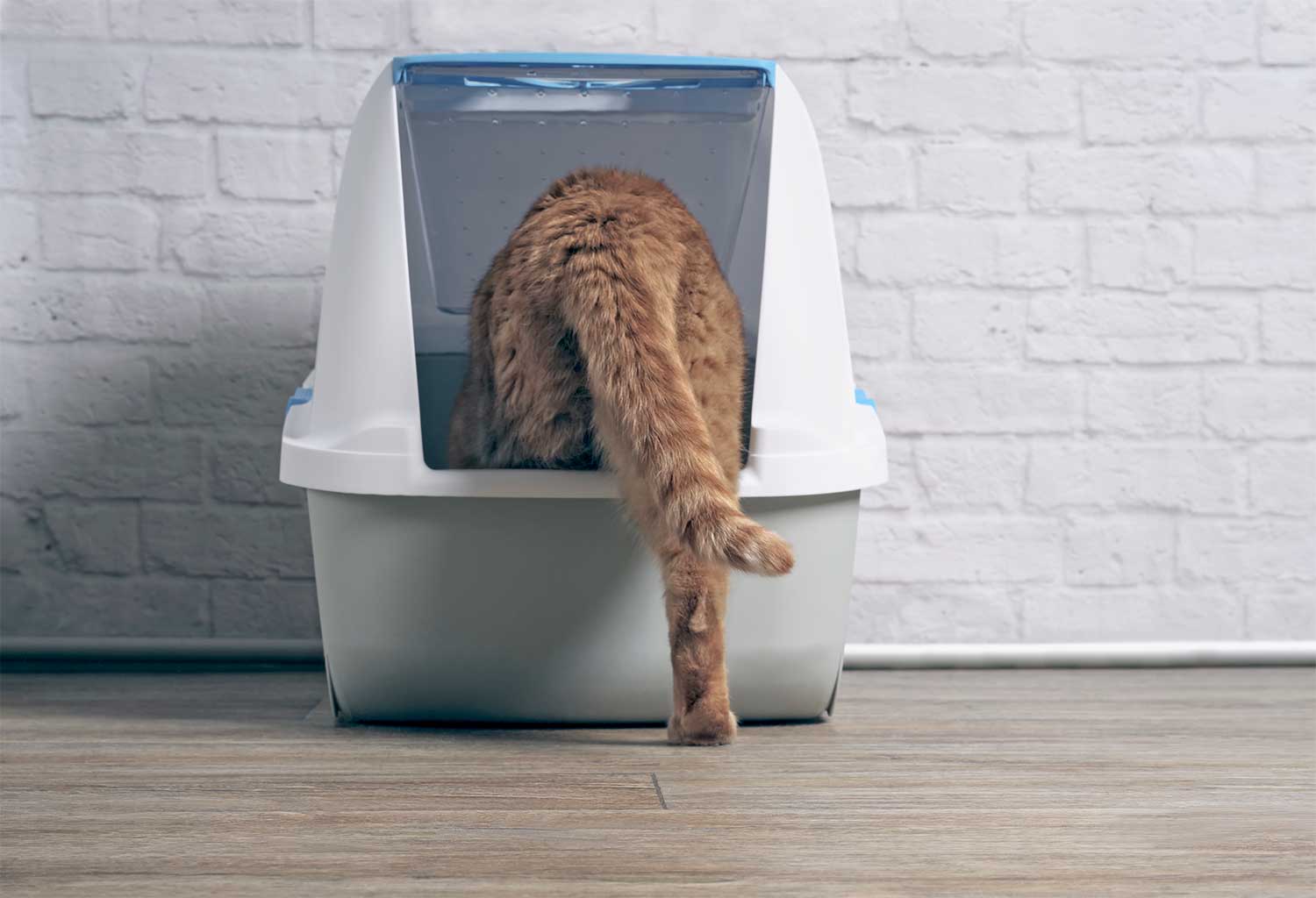 If a cat doesn't feel comfortable, it may deal with it by placing only its front half within the box. It's not an uncommon sight, and things could get messy quickly. Some cats might turn around to finish their business, while others will leave their waste right outside the box.

This behavior also might indicate their box is a bit too small. Cat owners should always make sure their chosen litter box has enough room for a cat to turn around.

Litter Is Being Kicked Out Of The Box

As we mentioned earlier, every cat will do some digging when they're taking a bathroom break. But a cat who's become a little overly enthusiastic with digging can indicate a too much litter issue. This behavior can present itself when a cat feels like the litter's caving in too much when they're digging.

Your cat will then have a hard time feeling like their hole's deep enough, hence the intense digging. It'll often lead to litter being kicked all over the room.

How Often Should You Entirely Change Out Cat Litter?

You should completely change your litter box's contents every week. We recommend wiping the entire container down to keep things fresh for your cat, as well. But this one-week guideline doesn't mean cat owners can skimp on the scooping sessions.

It's essential to keep scooping the litter daily, or your cat will start avoiding it. Cats are picky about their bathroom area's cleanliness, so don't give them a reason to search elsewhere.

How Much Cat Litter Do You Use Per Month?

Owners should also prepare for these numbers to rise with a cat who's got a specific medical condition. Cats with kidney issues that cause increased urination will need 10 to 15 pounds per week or 40 to 60 pounds per month. Of course, these amounts can change based on the litter type too:

We hope these discussions about cat litter amounts answered all your questions. But please, let us know about other concerns or issues in our comment section. We'll make sure to respond as soon as possible. Thanks for reading our article!