Clumping litter is a popular option among cat owners for its easy cleaning process. But there is a debate about what age it becomes a usable, safe option for kittens? But don't worry; we did significant research into this topic and found an answer to alleviate any concerns.

Kittens under four months and who aren't accustomed to using the litter box shouldn't use clumping litter. The danger comes from clumping litter being unsafe for curious kittens who have a habit of ingesting it.

This explanation is a bit on the vague side, so we will dive deeper into whether/when clumping litter is safe for kittens and other crucial topics in our following discussions. You'll soon feel comfortable using or not using this convenient litter choice. 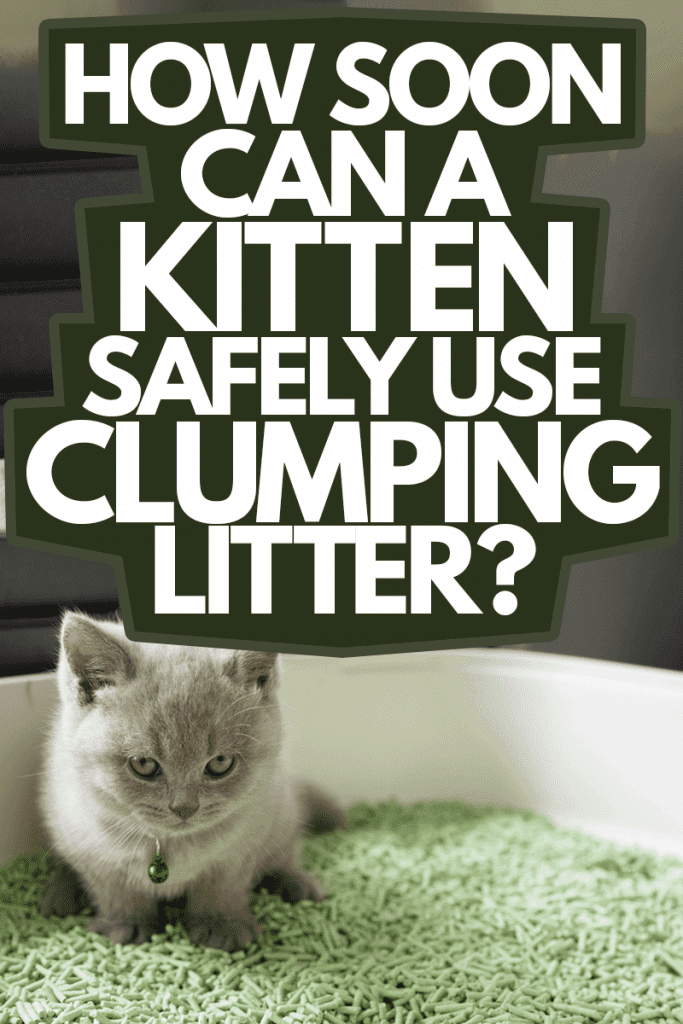 Clumping kitty litter is a concerning product for kittens due to its expanding nature. In other words, this litter expands whenever it comes into contact with liquids. If a kitten ingests a sizable amount of litter, this expansion could lead to an intestinal blockage.

After all, the litter can expand inside their stomachs or small intestines. This issue is more concerning for younger kittens than older ones or adults for two reasons:

Younger kittens will have smaller intestines, so they're more prone to blockages. Older kittens and cats are much less likely to have this issue. They'd have to eat a massive amount of clumping litter to face a potential blockage.

Young kittens are known for exploring the world by putting objects into their mouths. So you combine this habit with their playful natures, and it becomes an issue inside the litter box. It's not uncommon to see them rolling around, jumping, eating clumps, or playing with litter.

As you can imagine, these behaviors decrease as a kitten gets older. They learn through their experiences and stop eating problematic objects like clumping litter. 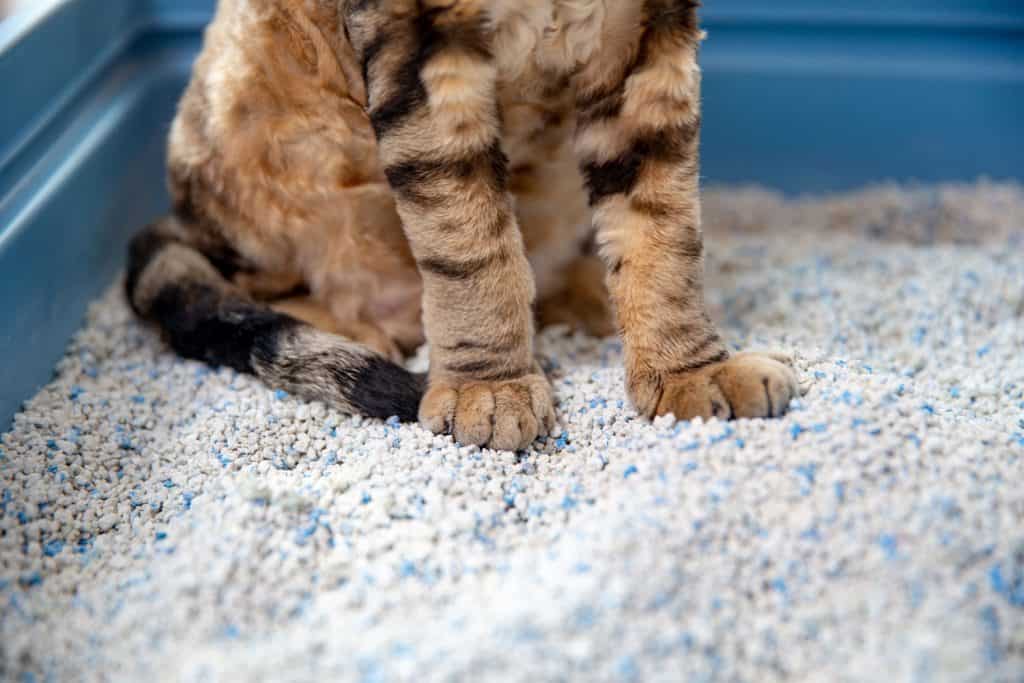 Aside from straight eating clumping litter, kittens can ingest it through other means. It can end up on their paws when they dig during a bathroom trip or if they enter the litterbox with damp paws.

Litter can then stick onto their paws, which becomes problematic during growing. They can accidentally ingest some of it when licking their fur. It isn't a concern for adult cats, but kittens are at a disadvantage with their smaller sizes.

As mentioned earlier, kittens are known for playing inside the litter box. So they could also roll around and get litter stuck in their fur, causing more issues when grooming. Therefore, clumping litter becomes something that a kitten can ingest in several ways.

If you're looking for information on why a cat would ingest litter, check out "Why Do Some Cats Eat Litter? [And How To Stop It]." It'll get to the bottom of your cat's litter eating habits.

What Does Clumping Litter Do to Kittens? 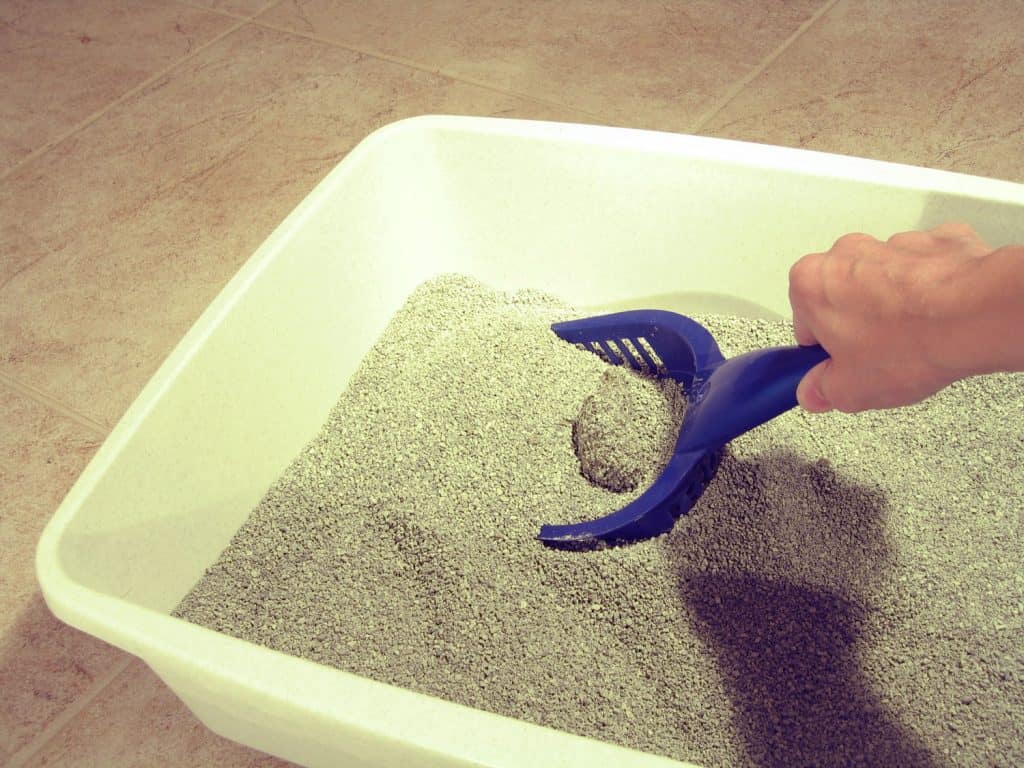 Many clumping litters contain quartz silica and sodium bentonite, which are unsafe for kittens to ingest. A small amount of these chemicals will only cause stomach problems for a kitten. But it gets a little more problematic with more significant amounts.

Your kitten can become seriously ill. Large amounts are dangerous because they form a rock-like obstruction when the litter hardens. It can lead to a gastrointestinal blockage that's a medical emergency and sometimes fatal.

These issues aren't only for kittens, either. Small dogs are at risk for developing intestinal blockages from clumping cat litters. It's not uncommon for a dog to view clumped-up litter box contents as a treat for them to eat.

Once ingested, a large amount of clumping litter can form an intestinal blockage in the dog. It's nothing a pet owner or dog wants to experience. So anyone with both small dogs and kittens needs to be careful when using clumping litter.

When Does Clumping Litter Become Safe for Kittens

As stated earlier, any concerns with clumping litter become a lot less problematic as a cat gets older. Therefore, this litter type ends up being a convenient choice at a certain point.

Most experts feel four months is enough time for a cat to learn litter is for bathroom usage only. After that, it'll give them the right amount of experience to understand litter isn't food. Once they know, a kitten won't have any trouble avoiding the risks of clumping litter.

We should also mention that there aren't numerous cases of clumping litter creating intestinal blockages. But it's always better to be safe when it comes to younger kittens. It's best to avoid the potential risk altogether.

Do Kittens Need a Special Litter? 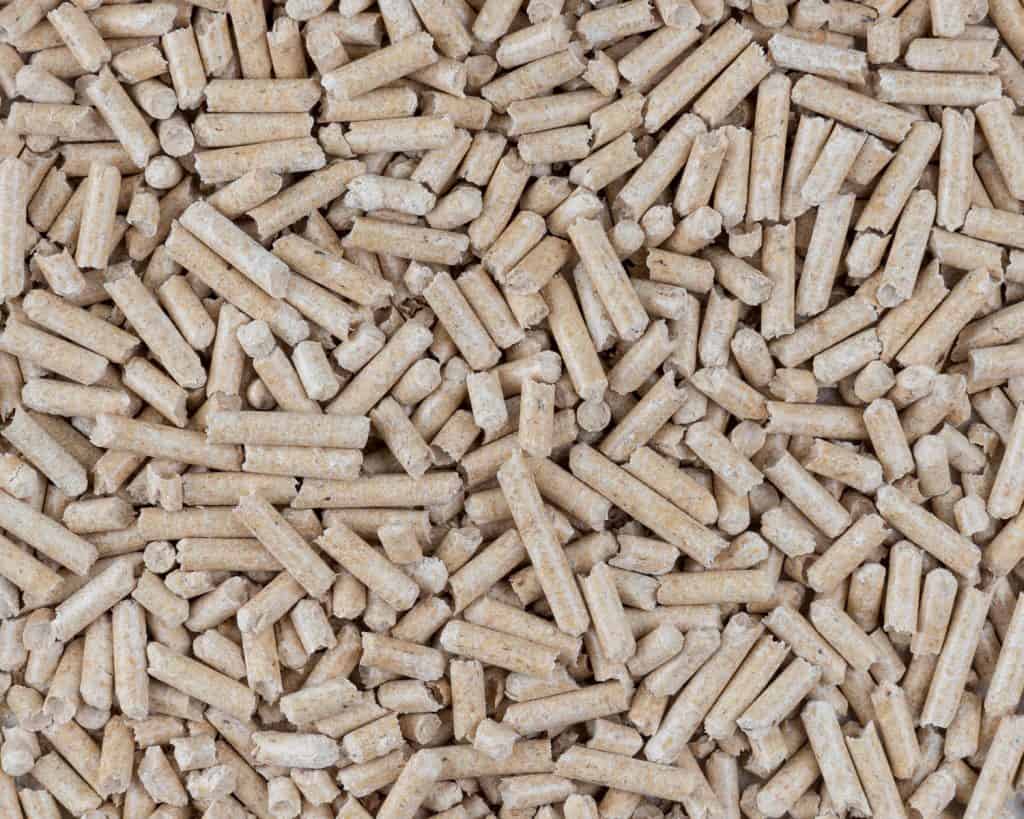 Many experts suggest kittens under four months of age use crystal or non-clumping clay litter. These options feature larger granules that are harder to ingest. Plus, they don't stick to your cat's paws, so the risk of eating during grooming decreases.

After four months, clumping litter will be more than fine. But still, read the instructions to ensure it doesn't contain anything dangerous or toxic. Avoid any litter with fragrances or harsh chemicals that could cause issues.

Looking at options made specifically for kittens is also an excellent idea. But read through the customer reviews for each choice before making a final decision. Other pet owners will always let you know whether there are any significant issues.

How to Switch Older Kittens Over to Clumping Litter 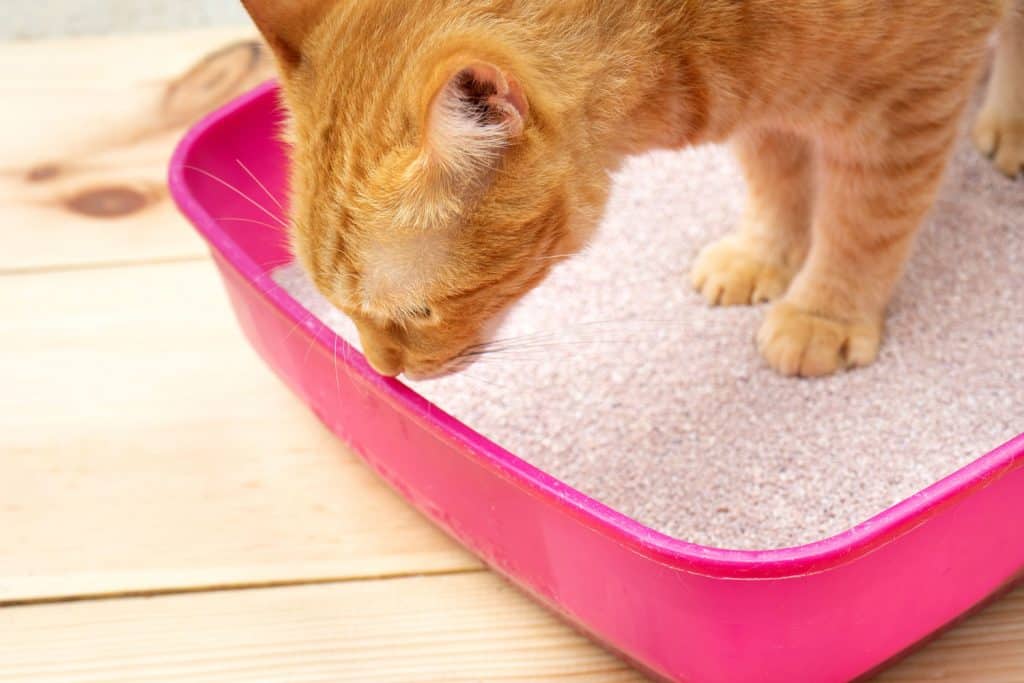 If you want to use clumping litter and your cat has reached the four-month mark, switching them over isn't a complex process. But there are a few guidelines to follow for a positive and successful transition:

Keep Your Cat's Stress In Mind

Any change for a cat will be a source of stress for them. Changing their litter box configuration isn't any different. So it's essential to keep it in mind when going about this process. An easy way of avoiding the issue is by keeping it as gentle and gradual as possible.

You'll also want to avoid changing anything else about their routine or lives. In other words, don't switch over to new food at the same time as changing their litter box. It'll only cause them to act out and rebel against the changes.

Cat owners should never dump the old litter and replace it with new clumping litter. The process isn't that simple. Moreover, it'll likely cause issues between you and your cat.

Your cat's rebellion against the new litter comes from stress. It'll cause them to avoid the litter box altogether and look for other ways to relieve themselves. Unfortunately, it often results in them going to the bathroom in the worst areas possible.

You can avoid these issues by making a gradual change. Slowly add some of the new stuff into the litter box each day, restoring how much you scooped out. From there, keep an eye on your cat's behavior and don't make a massive deal out of it.

For instance, you don't want to acknowledge their usage of the new litter. You want to keep the situation as relaxed and usual as possible. If you notice them becoming suspicious of the new litter, slow the process down slightly.

If your cat doesn't seem to care, continue to add more of the new litter each day. You'll soon have an entire litter box full of your new clumping litter.

How often should you change clumping cat litter? 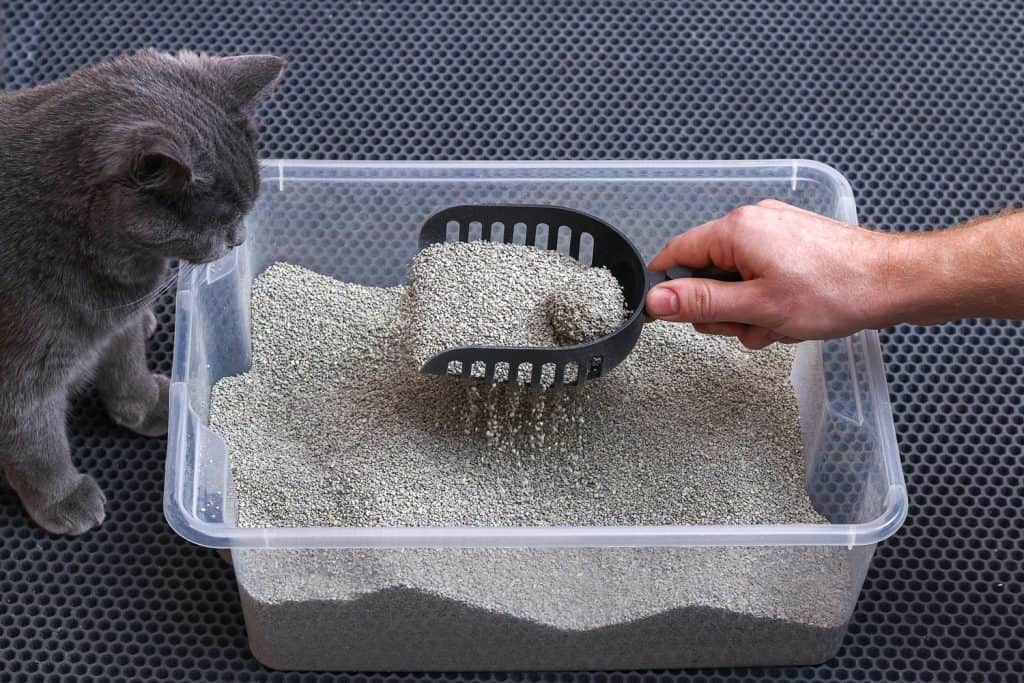 In most cases, cat owners can get away with replacing clumping litter on a bi-weekly basis. The process will consist of washing out the litter box with warm water and mild detergent. You should then need to let it dry entirely before refilling it with litter.

It's something that needs doing every time a full refill is required. But If you want to know more about this topic, check out our article, "How Often Should You Change Clumping Cat Litter?" It'll answer all your questions about using and cleaning clumping litter.

Cat owners are better off avoiding clumping litter until a kitten ages past four months. It's the simplest and safest way to keep your cat healthy. But once it reaches the four-month mark, there's no reason not to use clumping litter if it fits your needs.

If you have any more questions or concerns, please use our comment section. We'll make sure to answer each post as soon as possible. Thanks for reading!