You might be wondering if cat litter is harmful to humans. Is there any danger in being in contact with the material? Is it at all toxic? The answer to those questions is a bit complex, but we did the research and so we're ready to delve into it in this post. We're going to cover your need to know when it comes to your health and your cat's litter box. 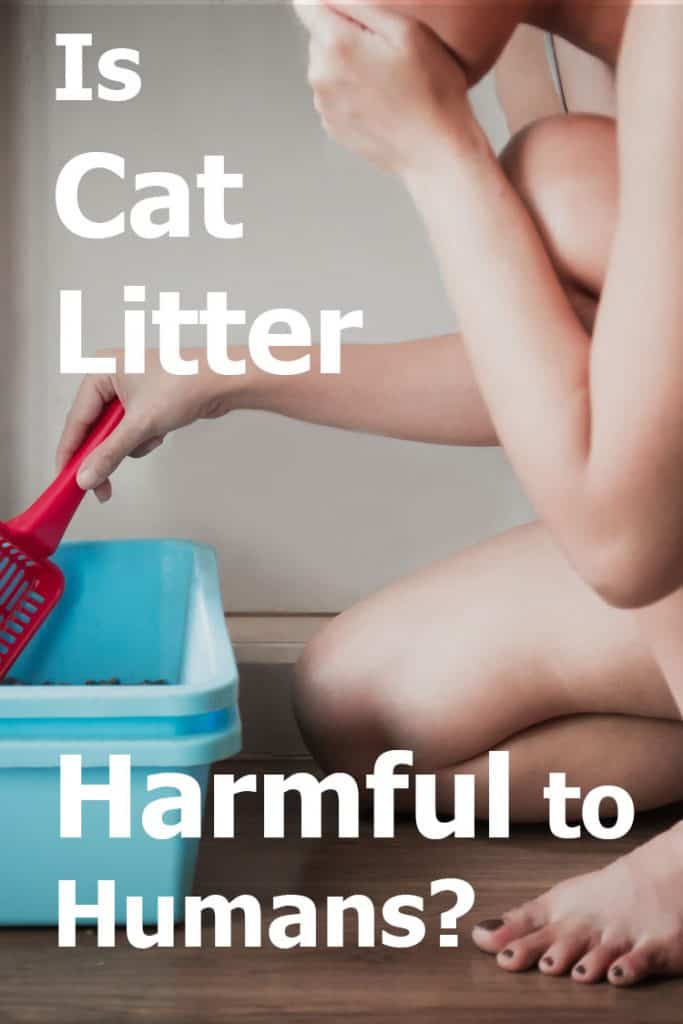 Overall, cat litter is not harmful to humans in the amounts we're exposed to at home. However, there are some aspects of cleaning a litter box that can be detrimental to your health.

Don’t let that news scare you, your feline friend can safely share your home for years to come. We’ve scoured the net and found out what separates a healthy litter box from a harmful litter box. Read on to get all the facts.

Cat ownership and litter boxes are twofold - you can't have one without the other. Although we know that cat litter is part of the package when owning a cat, along with cuddles, of course - it can still be cause for concern.

Breathing in the dust from your cat’s litter box is unpleasant, to say the least. There is a widely held belief among cat owners that this dust is actually quite harmful and could cause health complications including lung disease or even cancer.

When it comes to cats and their litter boxes, we want to help you separate speculation from the truth.

Different types of cat litter and how they affect your health

Not all cat litter are equal. Just as your furry friends vary, from Siamese to Sphynx, there are a variety of cat litter formulas available. We did our research, so you don't have to. Read on to learn about the different types of cat litter to help you decide which is the best for you and your health.

Clumping cat litter is a popular choice for many pet owners. Clean-up tends to be easier and less messy than non-clumping litters.  And less cleaning time means more time with your cuddly kitten!

The effect of clumping litter on your health

Clumping litter is a natural substance, usually based on bentonite, the substance that allows the liquid to clump together. According to the CDC, it's best to avoid ingesting or inhaling this substance.

Clumping litter may also contain crystalline silicate dust which according to Wikipedia is considered a carcinogen by the State of California, or in other words, can cause cancer. Exposure to silica by inhalation can increase the risk of lung cancer. However, many manufacturers who utilize silica in their cat litter use sodium silicate sand which is non-toxic for our feline friends.

Having said that, cat owners have a very limited exposure to the litter. Don't try and deliberately take extra deep breaths when filling up the box with clumping litter. However, it's fine if your exposure is limited to cleaning the box 2-3 times a day.

Non-clumping litter box formulas are primarily clay-based.  One of the perks of non-clumping litter is the ability to absorb lots of liquid - when compared to sand or regular dirt. Historically, this was the first type of commercial cat litter - long before the clumping formula was developed.

The effect of non-clumping litter on your health

Clay is a natural material but of course, that doesn't indicate much when it comes to safety issues. However, with clay also being less "powdery" than clumping litter, this seems to be a better choice for anyone concerned with health issues. You're simply less likely to inhale or ingest this type of litter.

This type of litter is made of silicon dioxide in the form of small white granules. Silicon is highly absorbent, which means urine gets soaked in the granules, keeping the box cleaner for longer.

The effect of crystal litter on your health

According to the CDC, silicon dioxide can cause irritation to the eyes and lungs. However, cat owners - and the felines themselves - are only exposed to very small amounts of the substance, making it safe to use.

Some options are cat litters made from recycled paper, corn, wheat, and grains.  So-called "natural" cat litter is basically litter that's processed from plan material. Don't be fooled by the hype - clay, bentonite and silica are all perfectly natural minerals. And either way, it's best to never assume anything is safe just because it's dubbed "natural".

The effect of plant-based litter on your health

The effect depends on the type of plant used as well as additional substances added during the manufacturing process. Some plants can trigger allergies in certain individuals, so that's something to pay attention to.

Should people with asthma steer clear of their cat’s litter box? 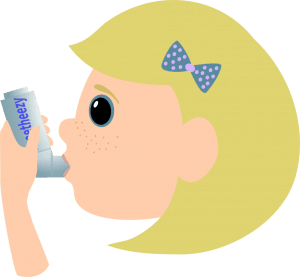 As most asthma sufferers will tell you, some perfumes or overpowering scents can trigger an asthma attack in any situation. Rather than using a scented or perfumed cat litter, opt for an unscented or natural cat litter.

Consider using silica or clay-based litters instead of clumping. When your cat uses their litter box, they’ll be less likely to create a dust storm that can be an irritant.

Whether or not you can clean the box will depend on your own type of asthma, triggers, and severity. Consult with your doctor about this. You may also ask about using a mouth mask while cleaning the box, to avoid any asthma flare-ups due to triggers.

Also, see the dust-free (or almost dust-free) litter formulas suggested in the next section.

Is there a link between kitty litter and lung cancer?

An often-heard rumor is kitty litter can cause lung cancer, in both humans and cats. We can understand if you're alarmed, it's a frightening report to hear.

While there is a concern with cat litter due to silica, there isn't enough scientific evidence to prove whether or not this tale is true. Some formulas of litter are more dust-free than others. Look for those as you shop if you're worried about this.

Here are a few examples -

Can I catch a disease from my cat’s litter box?

Going beyond the chemical composition of cat litter and it's effect on your help - what about the other things lurking in the litter box? We're talking about the products of pee and poo, including parasites and bacteria.

The short answer is that unless you are immunocompromised, there is a very low probability that you’ll catch a disease from your cat’s litter box. And keep in mind that babies, pregnant women, and seniors are always immunocompromised to some degree.

That's why we're covering these topics here as well. You should be aware of them but they're not a real threat to healthy young adult individuals.

A few common concerns when cleaning cat litter are exposure to ammonia (cat urine), and exposure to cat feces which could result in e. Coli, salmonella, and toxoplasmosis.

When it comes to ammonia, there is a small chance of developing breathing difficulties due to cat pee. However, the concentration of ammonia in cat urine is low, it's rare for this to be a health problem.

In fact, unless there is a case of neglect or failure to provide maintenance to a cat's litter box regularly, you'll likely find the smell of cat pee more bothersome as opposed to experiencing health issues from the ammonia.

Read more on how to reduce the smell from the litter box - the right way.

Escherichia coli, or as it’s more commonly known, E. Coli, is a bacterium not often associated with litter boxes but it can be quickly picked up by your feline friend via raw meat then transferred by their excrement to their litter box. By the same route, you can also get salmonella and a few other diseases which infect people through the fecal-oral route.

This is yet another critical reason why it's essential to clean your cat litter box regularly. We know, we know, we’re getting repetitive, but you have to admit that we do have a point. The longer the feces stay in the box, the more time you're giving bacteria to develop. Getting rid of it sooner, rather than later is therefore wise.

Also, this is exactly why the AVMA (American Veterinary Medical Association) officially discourages owners from feeding dogs and cats raw meat. It's the best way to keep harmful bacteria away from your cat - and yourself.

Using good hygiene such as washing your hands after cleaning a litter box will help keep both you healthy.

Toxoplasma gondii is a microscopic parasite which uses cats as a host during its life cycle. Cats become infected by eating raw meat (as a diet or by preying on a small animal. The parasite multiplies in the cat's body and then sheds its eggs (known as oocysts) in cat poop.

Generally, both cats and humans will not always show any symptoms of toxoplasmosis, particularly if neither has a compromised immune system. If a human does show any signs of disease, it's going to look like a common cold. However, for a person with a weakened immune system or a pregnant woman, this disease can be harmful to their health.

Don’t let this scare you away from pet ownership, there are some simple precautions you can implement to ensure both you and your pet are healthy including regular vet visits for your pet to ensure they're healthy.

If you think you may have contracted this disease, it's important to contact your doctor for professional medical advice.

If can reassign the task of cleaning a litter box until the baby arrives, you should! And if someone wants to take over the responsibility indefinitely, that's great too! But if you are the sole caretaker of your cat and cannot find anyone else to clean your cat’s litter box that doesn't mean you need to rehome your pet.

By taking precautions, such as wearing a mouth mask and protective gloves, this will reduce any risk of exposure to any illness a cat might carry, such as the disease toxoplasmosis, caused by the parasite Toxoplasma gondii (discussed above).

The probability of contracting this disease during pregnancy is quite low. It would take all of the following conditions to be met -

Actually, it’s far more likely to contract toxoplasmosis through the improper handling of raw meat or ingestion of undercooked meat. Still, just to be on the safe side, it's best to let someone else handle the litter box while you're pregnant - or at least use gloves.

It’s safe to say that a dirty litter box can be a harmful litter box. Infrequently cleaning a litter box can lead to bacteria and germs will build up, breeding a host of problems. If you’re having trouble staying on track and cleaning the litter box every day (yes, daily is best), a few tips you can try are:

You might think it’s a good idea to keep your cat’s litter box in a room you don’t often use. But, as the saying goes, out of sight, out of mind. Tucking away your cat's litter box where you don’t often see it might make you forget to clean it. Many owners choose to keep the litter box in the bathroom, laundry room, or a room they visit daily.

Read more: Where to place the litter box - a room by room guide

Invest in a self-cleaning litter box

The best way to avoid health issues resulting from a litter box is to stay on top of maintenance and keep your feline friends’ bathroom clean.