Taking care of a Persian cat or any cat with litter box issues can be a nightmare. It makes finding out the reason behind what's causing them a top priority in your life. We've done significant research and found some explanations to help your cat and you out of this miserable situation.

Litter box avoidance issues often originate from the same causes for every breed. But Persian cats do have a few breed-specific reasons behind their bathroom problems. We've compiled a list containing both unique and common explanations to help breakdown your Persian's litter box trouble:

Of course, listing these causes out doesn't tell the entire story. Our following sections will dive deeper into each one and offer some ways to overcome them. Let's ensure you have a better grasp of how to help your Persian cat get past these issues. 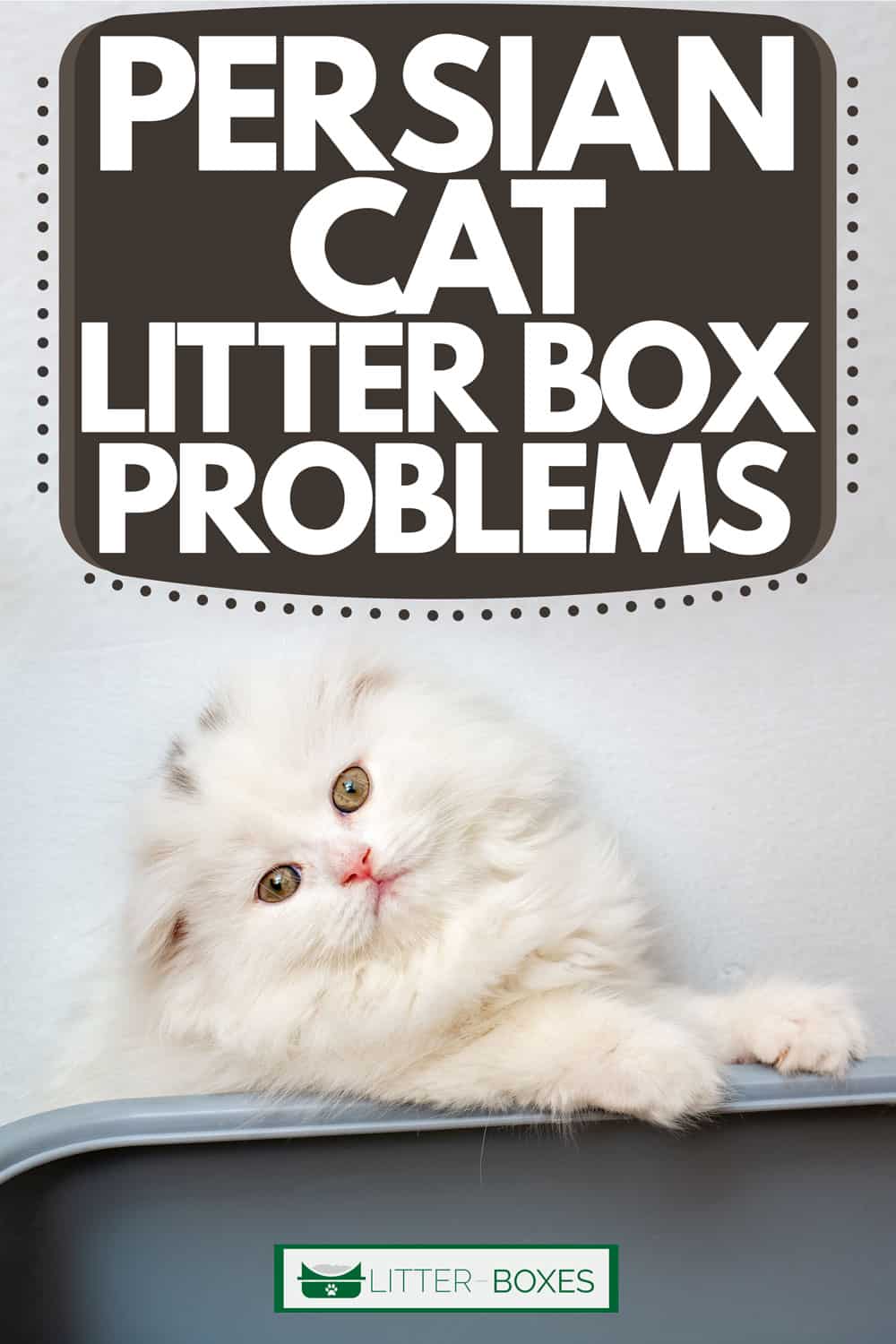 Modern purebred Persian cats are known for their unique flat noses. Some people love this feature because it's quite cute, but it comes with some detriments like breathing problems. These issues only get worse when coming into contact with certain substances, such as dust. 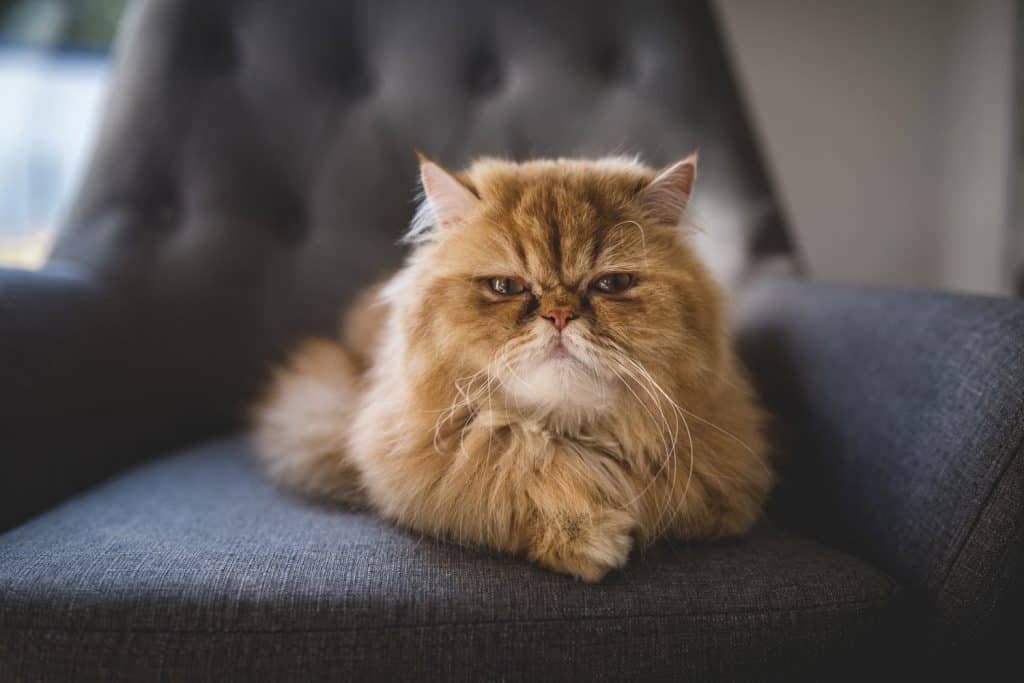 The breathing issue can cause litter box troubles because almost every type of cat litter has some dust. Persian cats may hesitate to use their boxes when the dust levels become overwhelming. If your chosen litter has a high dust level, it should be noticeable when pouring it. A small dust cloud might appear, or the mere action of pouring it out might cause you to cough. Either of these cases should be a telling sign that it's time to switch cat litters.

Other breeds that share the predicament are purebred Himalayan cats (Persian lookalikes with a colorpoint pattern) and Exotic Shorthair cats (essentially, Persian cats with a short coat). All three cats also come in a doll-faced version, where the nose isn't as flat, but they are often not recognized by all cat registries. 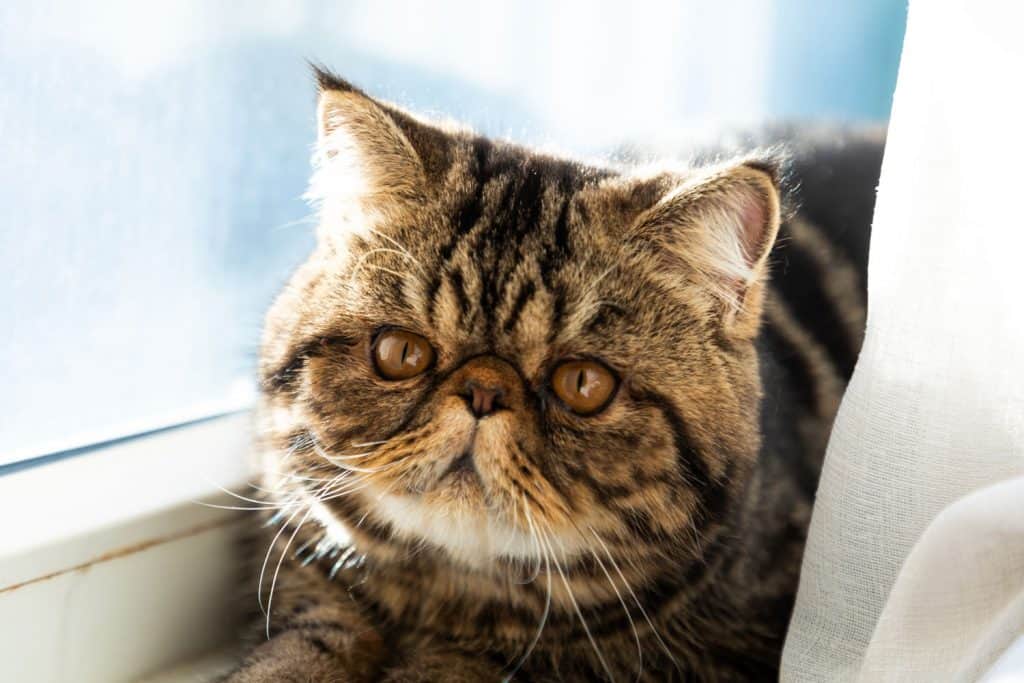 Your best options will be pine or recycled paper litter. Pine options are made from small pine pellets, which produce a strong odor that could be off-putting. But they're worth trying because these products are more affordable, and some cats don't mind the smell.

However, recycled newspaper litters are almost entirely dust-free. It could represent an effective solution to ensure dust never becomes an issue inside your cat's litter box.

2. Feces Sticking to The Long Fur of Persian Cats

Feces getting stuck in fur isn't a typical problem for cats. Their digestive systems are designed to relieve themselves without leaving behind any remnants. But it's not uncommon for household cats with long fur, such as Persians, to have this issue.

Persian cats will transport those poop remnants into other parts of the home. It might cause an owner to assume their Persian is having litter box issues when they aren't. But what does cause these poor long-haired cats to have this gross issue?

In most cases, the problem is a dry food diet. This food type will make their feces harder with a rough texture that will get stuck in their fur. A simple solution would be switching over to a wet food diet. You can even balance their food between dry and wet to ensure a non-sticky feces output.

But if you aren't feeding your cat dry food, try and figure out what part of their diet's causing the issue. It would help if you kept a food diary to document what they're eating and how it affects their feces. This process could take a while, but the culprit will become known sooner rather than later.

Health problems could be another reason behind your Persian's aversion to the litter box. The following three issues tend to be the main ones behind these issues:

Feline lower urinary tract disease or feline interstitial cystitis happens to be a brain condition, which affects a cat's bladder. Persian cats who have this illness will constantly urinate with little success. You may also notice them having a strained look when attempting to relieve themselves.

Other common signs are cats licking themselves when eliminating or bloody urine. It'll make a cat pee away from their litter box because there's an increased urgency and pain involved in the process. If you think this life-threatening condition could be the issue, please visit your veterinarian and get it treated. 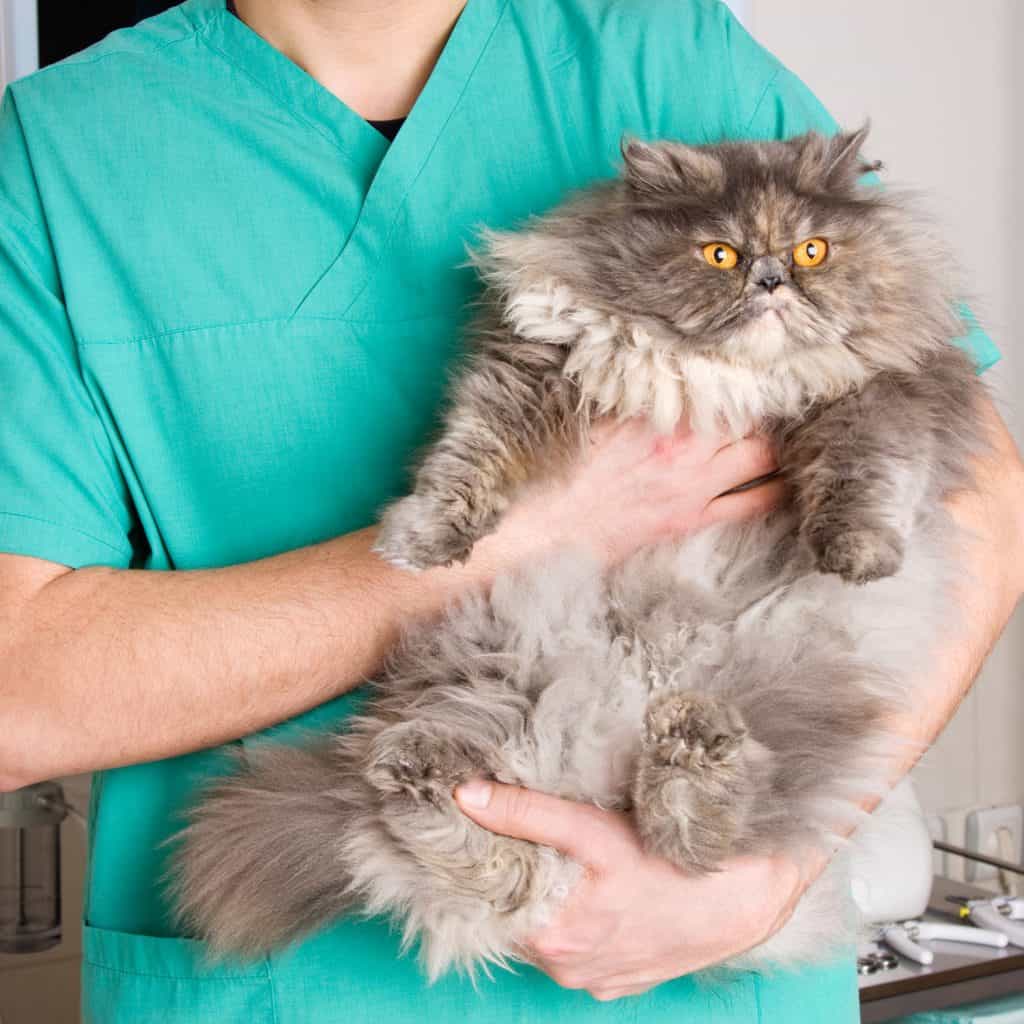 Is your Persian constantly entering their litter box and producing small amounts of urine? A urinary tract infection could be the issue. The alarming frequency often leads to them relieving themselves outside their litter boxes, as well. Visit your vet and figure out whether this condition is the issue immediately.

Kidney stones can cause litter box problems for a simple reason. Your Persian is attempting to pass the stone and relieve the discomfort frequently. Common symptoms include pain and meowing when eliminating or their abdomen is tender to touch.

In some cases, the reason behind these problems lies more with the owner than their cat. These five common litter box management issues could be what's making cats do their business elsewhere: 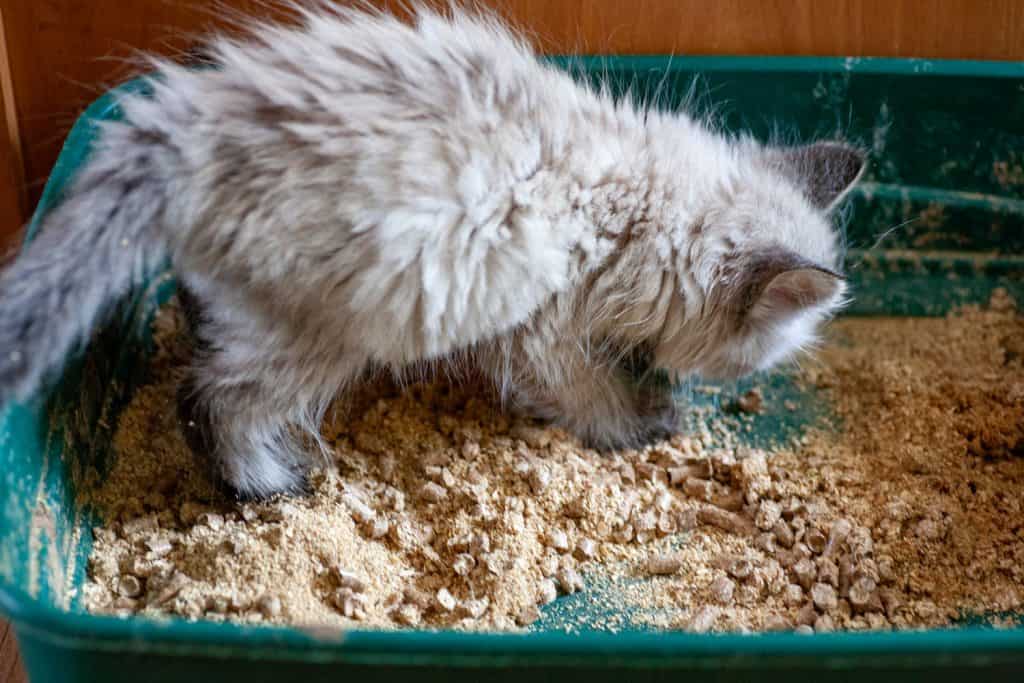 5. The Cat Developed a Surface or Location Preference

Some cats will develop a preference for relieving themselves on certain surfaces or locations. A few favorites among felines include carpets, bedding, or potting soil. If your Persian has grown fond of peeing in a particular place, the next move would be making it less appealing.

Let's say a Persian cat has begun urinating in a dark area regularly. Their owner can make this area much less appealing by putting on bright light within it. An even more effective solution would be using a motion-activated light in the area to deter them from entering.

A useful surface deterrent would be making it uncomfortable to stand in the location. Owners could place tin foil or double sticky tape where your Persian has relieved themselves in the past.

But provide them with additional litter boxes to ensure their litter box's location isn't the issue. It'd also be wise to offer them several types of litter. This action would allow your cat to show what kind meets their needs. It would be best to put the boxes near each other with these different litters inside them. It'll make the entire process much easier to evaluate.

Click here to see a large litter box (set of 2) on Amazon.

6. The Cat Can't Access or Use the Litter Box

Senior Persian cats or ones with physical limitations will have trouble using certain litter boxes. The problematic ones would include types with top entries or high sides. These designs could make for a difficult entrance and force them to take their business elsewhere.

It's worth noting that kittens could also be having these issues. Your best bet would be purchasing a box capable of making this entire process as easy as possible. Try switching to one with lower sides that ensure entering them becomes much more manageable.

One of the more common reasons for these issues is a negative litter box association. In simpler terms, your cat had something upset them when relieving themselves. Cats with this problem will seem overly hesitant to enter their regular litter box. Owners may even catch them entering the box and scurrying out quickly before using it.

A widespread cause for this issue would be a painful bathroom experience. For instance, a cat with a previous medical condition that caused painful bathroom visits might associate the box with those memories. This association might even haunt them when they return to full health.

Owners will need to rebuild their cat's confidence in using the box by utilizing positive reinforcement techniques. These methods include using treats or giving extra attention to cultivate good behaviors.

Stress can do quite a number on a cat's litter box confidence. These animals can become stressed by situations that their owners don't see as too troubling, such as moving or new family members. Honestly, any significant change to their daily routine can make cats anxious. 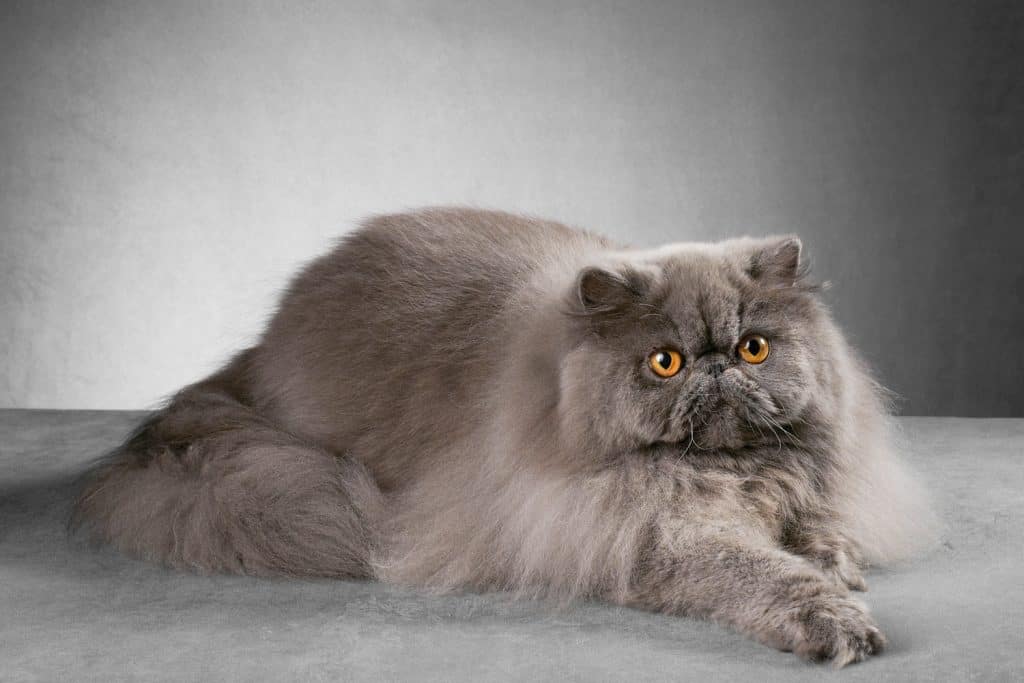 These stressors can then make them stop using their litter boxes. It becomes an owner's job to identify where the stress is coming from and remove it from their cat's lives. Some examples include keeping their routine predictable, retaining their food bowls in the same place, and preventing your dog from chasing them.

In some instances, owners won't be able to remove the stressors. But they can reduce them by using diffuses or sprays containing calming pheromones. These products have proven to be successful in keeping cats relaxed and stress-free.

9. Conflicts with Other Cats

Bathroom problems can manifest from cats having issues with their siblings. If you're a multiple cat owner and a conflict makes one feel anxious, place some additional litter boxes where they feel safe. It should help them feel less stressed about doing their bathroom business.

You should provide sufficient resting spots for each cat, as well. These spots will ensure each cat has a way to avoid their brother or sister whenever they want. It should help feel less anxious when nature comes calling later on during the day.

Distributing other resources, such as water, litter box food, and toys, is another way to avoid conflicts. Make sure these items are within areas where the two cats won't contact each other.

If these discussions helped solve your Persian cat's litter box issues, let us know in our comment section. We'd love to hear more from you!

9 Litter Box Benches You Should Check Out

Where to Put the Litter Box? a Concise Room-By-Room Guide

How To Get Cat Litter Residue Off Floor [Inc. Hardwood]