Maybe you ran out of cat litter, or you’re simply looking for a cheap alternative to cat litter. Either way, you’re wondering: Can you use sand instead of cat litter? Fortunately for you, we’ve gathered everything you need to know about using sand for cat litter. 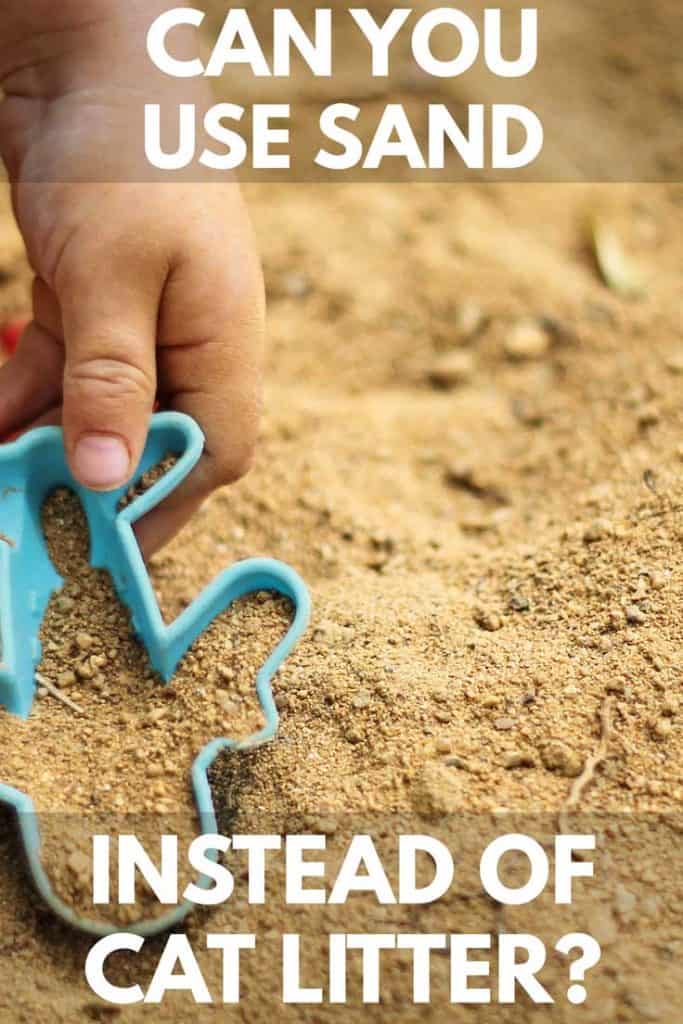 You can use sand instead of cat litter in your cat’s box. In fact, there are actually a few advantages to doing this, however it's not necessarily a perfect solution in all cases.

Yes, while there are some pros to using sand instead of commercial litter, there are also some drawbacks. Keep reading to find out more about how to use sand instead of cat litter so you can have the best possible experience with it.

Advantages of Using Sand Instead of Cat Litter

Let's start off by looking at some of the reasons you may want to use sand in your cat’s litter box.

If you're a fan of clumping cat litter, then sand is not a bad option for you. Actual sea sand should form loose clumps when wet, so you can easily remove all waste from the cat box. This means having to dump and replace the whole box less frequently.

Many cat litters are designed with the human in mind, which can make them dangerous for your feline friend. For example, they may have chemicals to cover odors that can harm cats if they eat them.

Another common danger of cat litter is clay clumping litter. There have been a few cases of cats that ingested the clay dust while grooming themselves. The particles then clumped in their digestive tracts and caused some serious problems.

With sand, even if your cat eats a little, it doesn't pose a threat to their well-being.

Sand is 100% natural, which limits its environmental impact both when it's packaged and disposed of. This is also what makes it safe for your cat since there aren't chemicals added to it. So, if you prefer natural products, sand is a way to do that.

If you've ever had an uncovered sandbox for your kids, you know how much cats love using sand. In fact, if you're having trouble getting your cat to use the litter box, sand might encourage her to do so.

Keep in mind that this isn't always the case, since it's also possible that a change of litter could make your cat decide to look for other options. If you're making a permanent switch to sand and not just using it for an emergency situation, gradually transition to sand.

The final reason people choose sand for cat litter is that it's inexpensive. Most of the time, you can get a bag of playground sand for less than a bag of cat litter. Or, if you have access to free sand, then you won't have to pay anything for your cat litter!

Disadvantages of Using Sand Instead of Cat Litter

Now let's take a look at some of the reasons you may want to avoid using sand for kitty litter.

This is one of the biggest drawbacks for many people. Sand simply isn't going to absorb litter box odors on its own. As you'll see in the next section, there are things you can do to control the odor when using sand in the litter box.

With its fine particles that stick to your cat’s feet, sand can be a messy litter alternative. Some cats may also enjoy the change in litter TOO much and end up playing in the sand, leaving you with a huge mess to take care of.

We said before sand was safe, so what gives? If you buy sand by the bag, it's likely safe for your cat. However, if you collect it yourself, it may be harboring parasites and dangerous bacteria. So, you'll need to sanitize this litter first.

How to Use Sand in the Litter Box

To combat the three main problems associated with using sand in the litter box, there are three steps you should take before filling your cat's box with this substrate.

Depending on your situation and where you get the sand from, you may need to do all of these, or none at all!

If you are bringing cat litter in from outside, you will need to make sure it's free from diseases and parasites before you fill the cat box. To kill any bacteria or parasites that may be lurking in the sand, bake it in the oven for at least 10 minutes at 260 degrees Fahrenheit.

Make sure you let it cool completely before adding it to your kitty’s litter box so you don’t risk burning her little paws!

To control the odors that come with a litter box, mix a generous amount of baking soda in with the sand. Alternatively, you can sprinkle it on the bottom of the pan before adding the sand. This can control litter box odors as well as or even better than most cat litters.

Read more: Should you use baking soda in the litter box

Adding a litter mat beneath or in front of your cat's litter box will help prevent him from scattering litter throughout your entire house. Litter mats are designed to grab and trap litter particles as your cat leaves the litter box.

If you have a cat that likes to dig and a litter box with high sides, you may want to add some more sand to satisfy this urge to dig. This will keep your cat happier and may keep clumps from getting stuck to the bottom of the pan.

As with all types of litter, you’ll want to scoop it once or twice daily. If you have multiple cats, you’ll need to scoop even more often unless you have several litter boxes.

Dump and replace all of the sand several times a month, and be sure to thoroughly clean the cat box at least once a month. As your plastic litter box becomes scratched and damaged, you’ll need to replace it.

Where can you get sand for the litter box?

Again, your safest option is to buy sand. The type that you would buy for a kids' sandbox. Here are a few alternatives from Amazon -

5 lbs sacks of pure play sand for. Marketed to increase your kids' creativity, it could work very well for a cat's litter box.

A far more affordable option. This sand may not be organic but it's clean and pre-packaged. You would need a place to store this huge 50lbs sack though.

Sand can certainly work as a litter substitute whether you're facing an emergency or just looking for an alternative to traditional cat litter. It’s great because it’s natural, safe, and clumps. While there are some disadvantages, taking a few simple steps can solve those issues.

If you’re still not sure sand is going to work for you and your cat, don’t worry. It’s not the only thing you can use in your cat’s box beside litter.

Here are a few other cat litter substitutes to consider:

You can learn more about these and get more information on litter boxes and cat litter by checking out this post about cat litter susbstitutes. There, you can find everything you need to know to make sure your cat can take care of his business in style and comfort.

Cat Litter Substitutes – 10 Things You May Have Never Considered

Is Your Cat’s Litter Box Too Small?

Should You Add Baking Soda to Cat Litter?

Do Litter Box Air Purifiers Help? (Plus 7 You Can Try for Yourself!)

What Can You Use as Emergency Cat Litter?