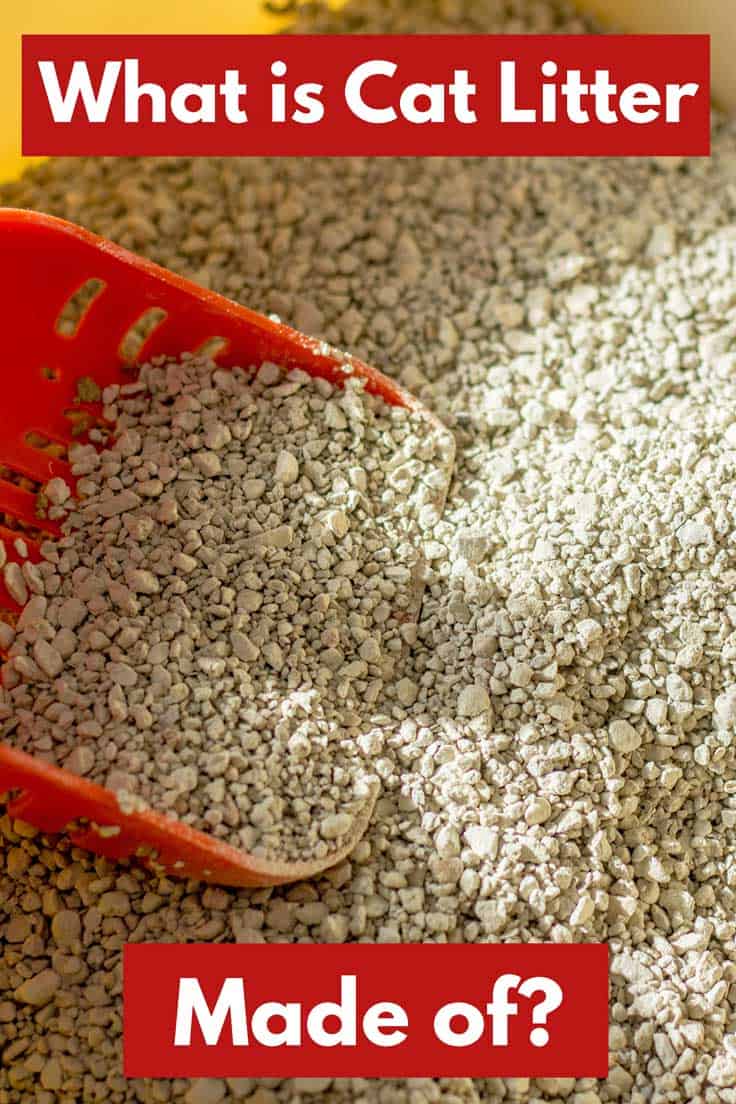 Common cat litters are generally made of one of the following:

Less common cat litters are created from corn, wheat, sand, or wood. While there are a variety of options available, absorbent clay makes up 95% of the cat litter market with materials such as silica, wheat, corn making up only 5%.

Choosing a kitty litter for your cat largely depends on your pets needs and, for many pet owners, depends on what you want the materials you want in the cat litter. Fortunately, there are multiple options available made from diverse materials. In this article we’ll discuss types of kitty litter, what they’re made from, and the best cat litter on the market today.

What are the different types of cat litter and what are they made from?

Cat litter has come a long way! There are many different kinds of cat litters available to pet owners on the market today. While they vary in material and absorbency, the end goal remains the same - to provide an efficient bathroom for your favorite feline friend.

Clumping cat litter is most often made from sodium bentonite clay. These cat litters are generally of a finer texture which allows it clump better which can make clean up easier.

Sodium bentonite is a clay material that is popular and used in clumping cat litters. It is often mixed with quartz when used in kitty litter. Both are great absorbers and have clumping qualities, meaning when liquid combined with the clay material it will clump together making litter box clean up easier.  Bentonite clay is a natural element and sourced from below the surface of the earth.

Non-clumping cat litters are made from Fuller’s earth, which is a clay material or calcium bentonite, zeolite, diatomite and sepiolite which are all types of rocks and minerals.

Fuller’s earth is clay material made from either palygorskite, which consists of aluminum, hydrogen, magnesium, oxygen, and silicon) or bentonite, which includes of the aluminum phyllosilicate, and montmorillonite.

Calcium bentonite can absorb quite a bit of fluid, as equal to its dry mass. However, it will not clump. Non-clumping kitty litters are generally less expensive than clumping cat litters however they require more frequent litter box refilling.

Silica gel crystal cat litter is made from sodium silicate sand. You may know of silica cat litters as crystal catterIf you looked at one granule up close; you would see they have teeny, tiny pores which help them absorb liquids. This makes it an excellent clumping litter. Trapping roughly 40 times its dry mass in fluid, urine and odors stay inside of the beads making silica a useful and popular kitty litter.

Sodium bicarbonate in its natural state is called nahcolite which a mineral. It is commonly known as baking soda is often added to clumping cat litter to help deodorize a litter box, absorb urine smells, and mask odors.

Often obtained straight from the source, corn, wheat, sand, or wood cat litters can often be found naturally with no additional materials required. Some pet owners may purchase manufactured cat litters with materials listed above, however, generally, no other minerals or additives are found, except for baking soda which is to help deodorize the alternative kitty litter.

How are these types of cat litter made?

Cat litters are made a variety of ways which result in a range of environmental impacts.

For instance, bentonite clay is a natural mineral, but the manner it is sourced can have a severe ecological impact. This is due to surface mining. This clay that is frequently found in cat litters is generally obtained via strip-mining which means a considerable hole must be dug up to reach the materials well below the earth, damaging and interrupting the ground before attempting to return it to its natural state. Because of this interruption often, many animals natural habitats are disturbed.

A less common kitty litter alternative silica is made by processing sodium silicate sand, commonly known as beach sand, with oxygen and water. Due to the dangerous dust particles that caused during processing, it can be hazardous to factory workers.

If you prefer, you can make your cat litter at home. When it comes to DIY alternatives, making cat litter out of paper is a popular option.

By using paper torn into strips, water, and baking soda, you can create a low-cost, easy to make an alternative to commercially sold cat litters. The bonus to this it contains materials that are easy to find and pronounce!

Overall, cat litter in and of itself isn’t harmful. If a cat ingests an excessive amount of cat litters, they can become sick. But in general, the materials in which cat litters are made from are not scientifically proven to be harmful to your pet or humans.

If you are worried about the clay in cat litter, you could switch to wheat or corn-based kitty litters. They have similar clumping qualities and, although a bit more expensive, may help ease your worries and your mind.

Before the creation of commercially used cat litter, people generally kept their cats and their litter trays outdoors. Rather than the store-bought litters we use today, ashes or dirt were often used in a litter box. These options weren’t nearly as effective and were quite messy which unfortunately forced most people to leave their furry little friend outdoors.

In the late 1940s, Edward Lowe was desperate to find an alternative and help bring our feline friend indoors. He toyed with different ideas and materials an eventually landed on the idea of clay as an indoor cat litter. He initially gave the litter away for free, attempting to woo customers and finally went from store-to-store across the country to market his product. And the rest is history!

Which cat litter should you use?

Now that you know what’s in your cat litter perhaps you're wondering which kind you should use. Ultimately, that’s up to your pet and what they prefer. While you might opt for a wheat-based cat litter, your cat may disagree.

Some pets have allergies, just like us humans, while others have texture preferences and make not like the feel of large granules between their feet. Whichever cat litter you decide to offer your pet, it’s important to note that cats aren’t fans of change. Be sure to make the change gradually which can happen in one of two ways. You can either offering your pet the option of both their old litter and the new, preferably side by side. Or you can mix the old style of cat litter with the different litter a little bit at a time, gradually increasing the ratio.

Dr. Elsey’s cat litter is made from a medium grain clay. It is widely recommended by cat owners who claim it does a fantastic job of masking odors and it is not as dusty as some clay cat litters.

Arm & Hammer is another clay-based clumping litter. Reviews say this litter is excellent at forming rock hard clumps quickly making clean up quick and easy and note there is minimal to no tracking.

PetSafe’s non-clumping cat litter is made from crystals. Reviews love this litter for its excellent clumping qualities and odor control.

Remember, while you may prefer a natural and less processed cat litter your cat may not agree. Ultimately, it’s their bathroom and comes down to what your cat likes the best. We know if you're anything like us, your cat's happiness is key!

9 Cat Litter Scoops with Small Holes (That Could Be the Solution to Your Litter Troubles!)

30 Hidden Litter Boxes You Should Check Out

Is Cat Litter Bad for Dogs?

Excessive Digging in the Litter Box – How To Help Your Cat

How To Get Cat Litter Residue Off Floor [Inc. Hardwood]