Cats playing in their litter boxes is a common nuisance for pet owners. It can create a whole list of issues with the litter rocks getting everywhere in your home. So, many people end up wondering how they can prevent this behavior. After doing some research, we found a few methods to help prevent litter box playing from being a recurring issue.

The following seven techniques have proven to keep cats from playing in their litter boxes:

But pet owners will need a little more context before using these methods. The following section will look deeper into each to offer a better idea of how they prevent litter box playing. We'll also cover a few other related topics to ensure you have a complete handle on this situation. 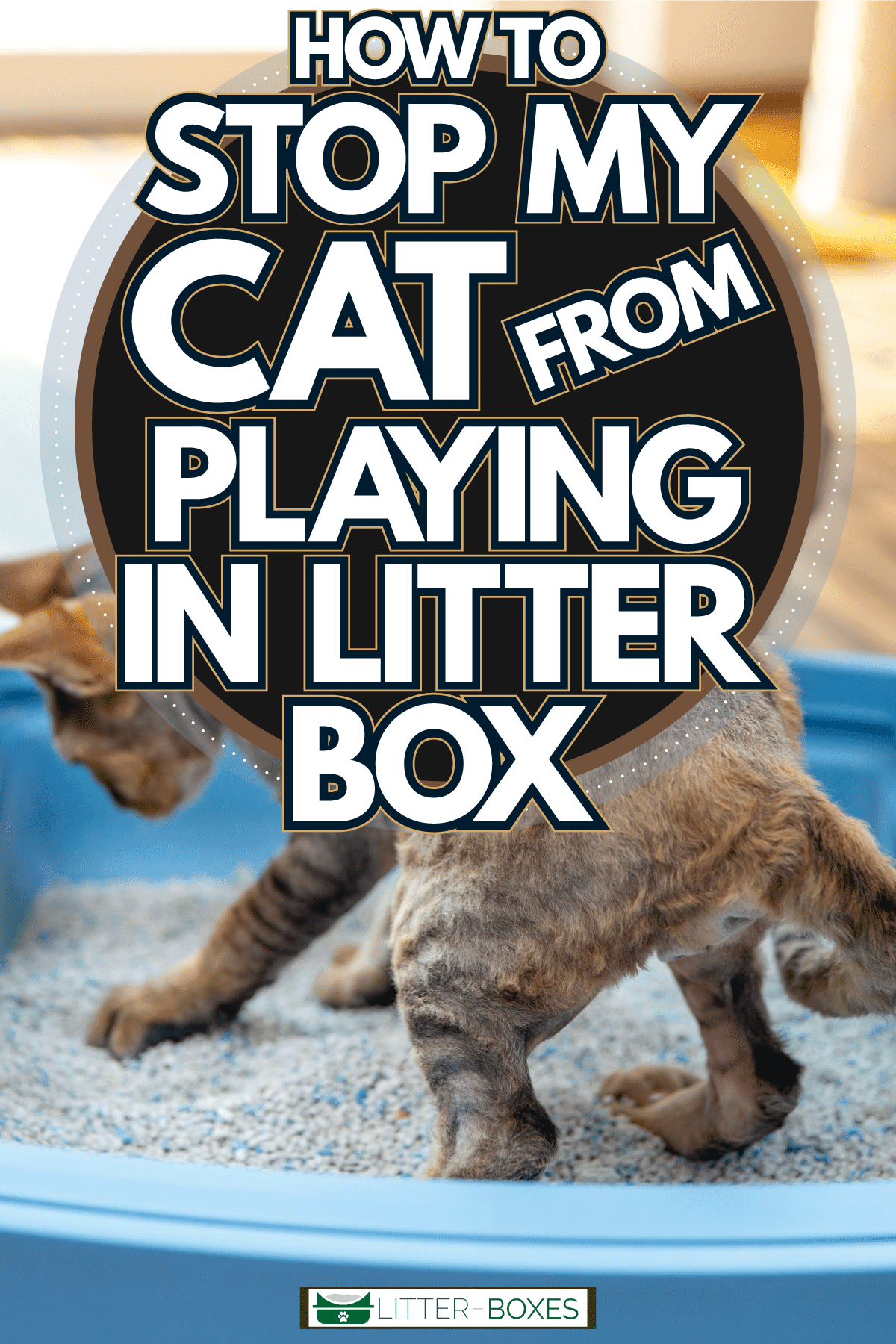 7 Methods To Prevent Cats From Playing In The Litter Box

No cat owner wants to experience litter rocketing around their home or apartment. After all, cat litter is quite expensive, especially high-quality options. But these seven methods will make sure to curb this playful behavior and redirect it somewhere else.

The first preventative measure is making sure there are enough litter boxes within your home. Experts recommend one box per cat, plus one extra in most cases. However, it can change based on your cats and their respective personality.

For instance, one cat might like their litter box within the bathroom. Another cat could prefer doing their business in a laundry room litter box. Figuring out these preferences can help prevent them from feeling territorial and spreading their scent to ward off the other cats.

So multiple cat owners would do their best to have several litter box locations. It'll help cut down on fights and other litter box-related issues. You'd be surprised by the difference that having a few options can make in reducing the amount of litter box playing.

An open, uncovered litter box type encourages more playing than other litter boxes. Therefore, if you're having these issues when using an open model, switch to a covered litter box. It'll provide cats with more privacy while restricting their ability to play in the enclosure.

If you want to learn more about covered litter boxes, check out our article Do Cats Like Covered Litter Boxes? It'll take you through everything a person would need to know about them.

If your cat is tossing around their litter, it's time to clean it out and put fresh litter inside. You can also avoid this problem by keeping up-to-date with cleaning it. After all, this aggressive playing could be their way of telling you they aren't happy with the litter's quality.

Most cat owners find clumping litter to have the most effortless cleaning process. It's a simple matter of scooping out the clumps/feces and substituting fresh litter.

Cats who are experiencing stress can take it out on their litter box. So, purchasing a few plug-in diffusers can help alleviate those feelings. These products will release calming pheromones to help relax your cat during stressful situations.

5. Provide Them With Other Play Areas And Toys 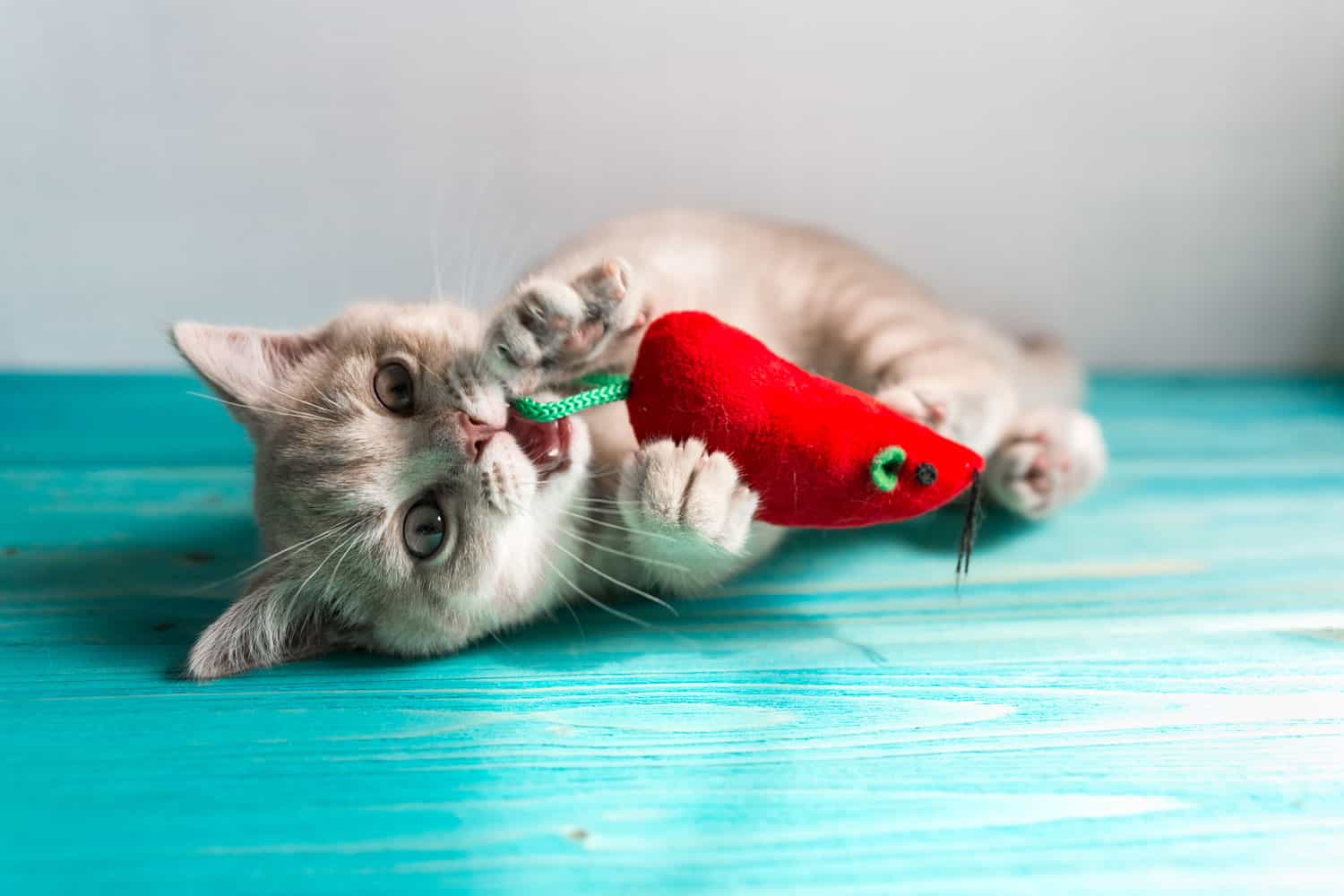 Providing your cats with other areas to release their pent-up energy is always a good idea. We recommend investing in cozy beds, cat trees, or even setting up cardboard boxes. These options will help redirect this energy away from the litter box.

One of the most straightforward solutions is giving them less litter to fling around your home. Your cat won't have as much fun playing in a litter box with a smaller amount of litter. However, there's a downside—it'll need cleaning on a more regular basis.

7. Make An Effort To Meet Your Cat's Emotional Needs 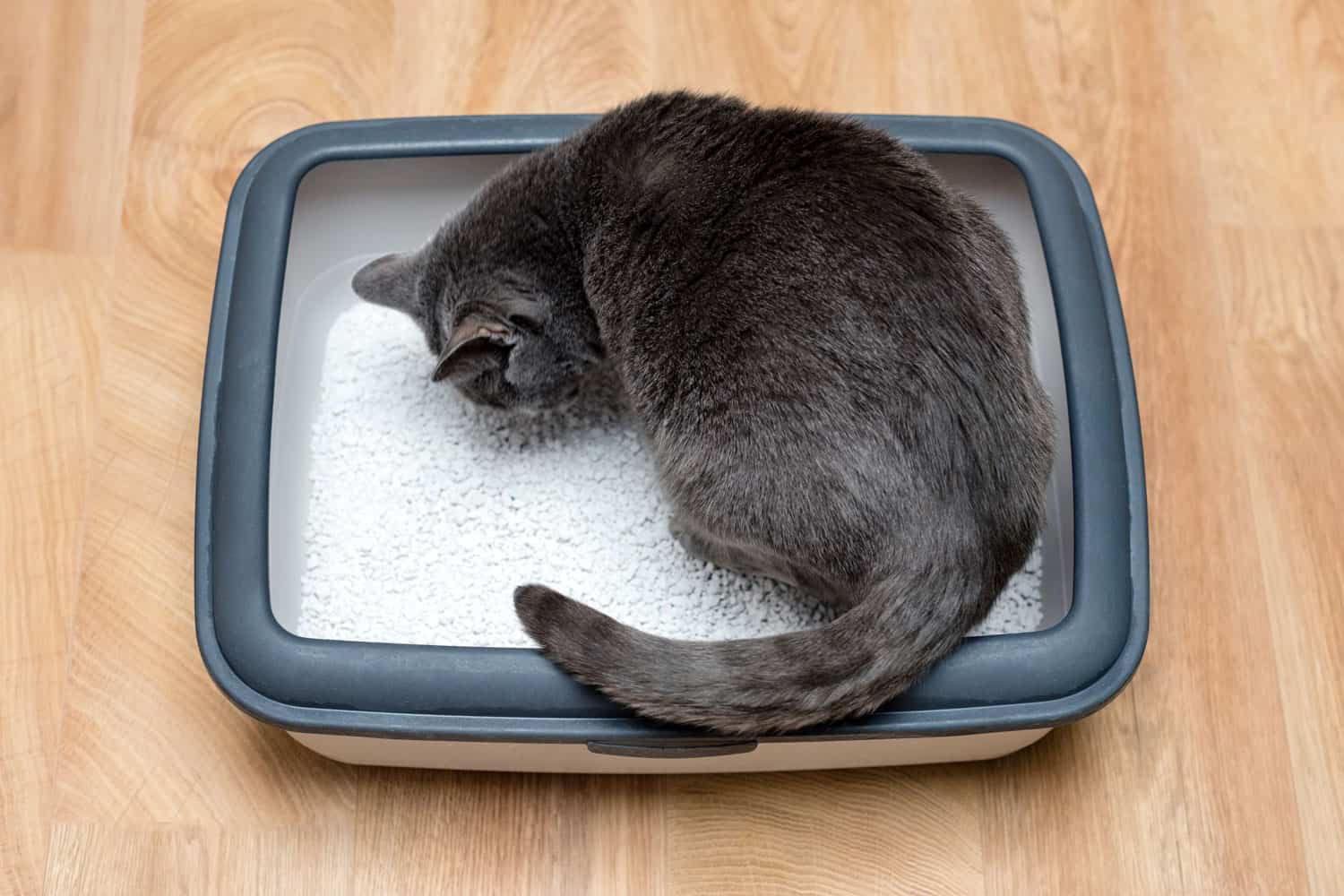 In some cases, a cat may use the litter box as a hiding spot or place to de-stress. You can help them deal with these feelings by providing them with extra love and attention. As a result, they'll run over to you rather than retreat into their litter box enclosure.

These situations usually arise when there's been a change in the cat's schedule. It often results in them acting out, such as making a mess around or in the litter box. So please make an effort to spend more time with them, and the trouble should dissipate.

But if the bad behavior continues, consult with your vet or a behavior specialist. It's essential to understand what could be causing these issues.

Is It Normal For Cats To Play In Their Litter Box? 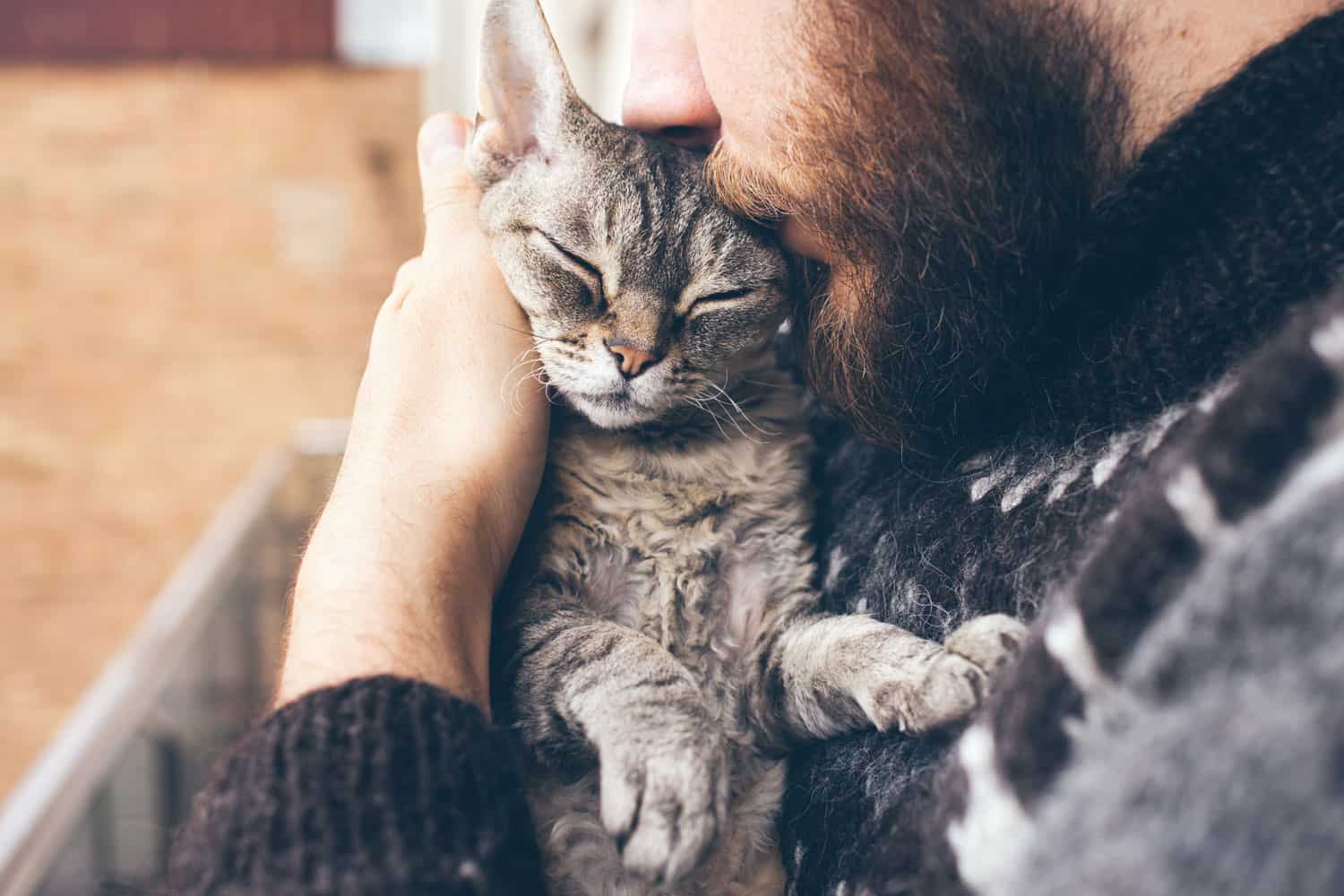 A common follow-up question is whether playing in a litter box is normal cat behavior. In most cases, a cat digging or scratching in their bathroom area isn't a cause for alarm. It's a part of their standard bathroom routine, as felines will cover or bury their poop.

But this behavior becomes abnormal when it gets excessive. For instance, a cat kicking litter or doing zoomies within the box isn't normal cat behavior. These instances are where a cat owner should start to think about using techniques to prevent them.

You'll also want to start examining what could be causing this behavior. We'll discuss the causes of this behavior in more detail within our next section.

Why Does My Cat Play In Their Litter Box? 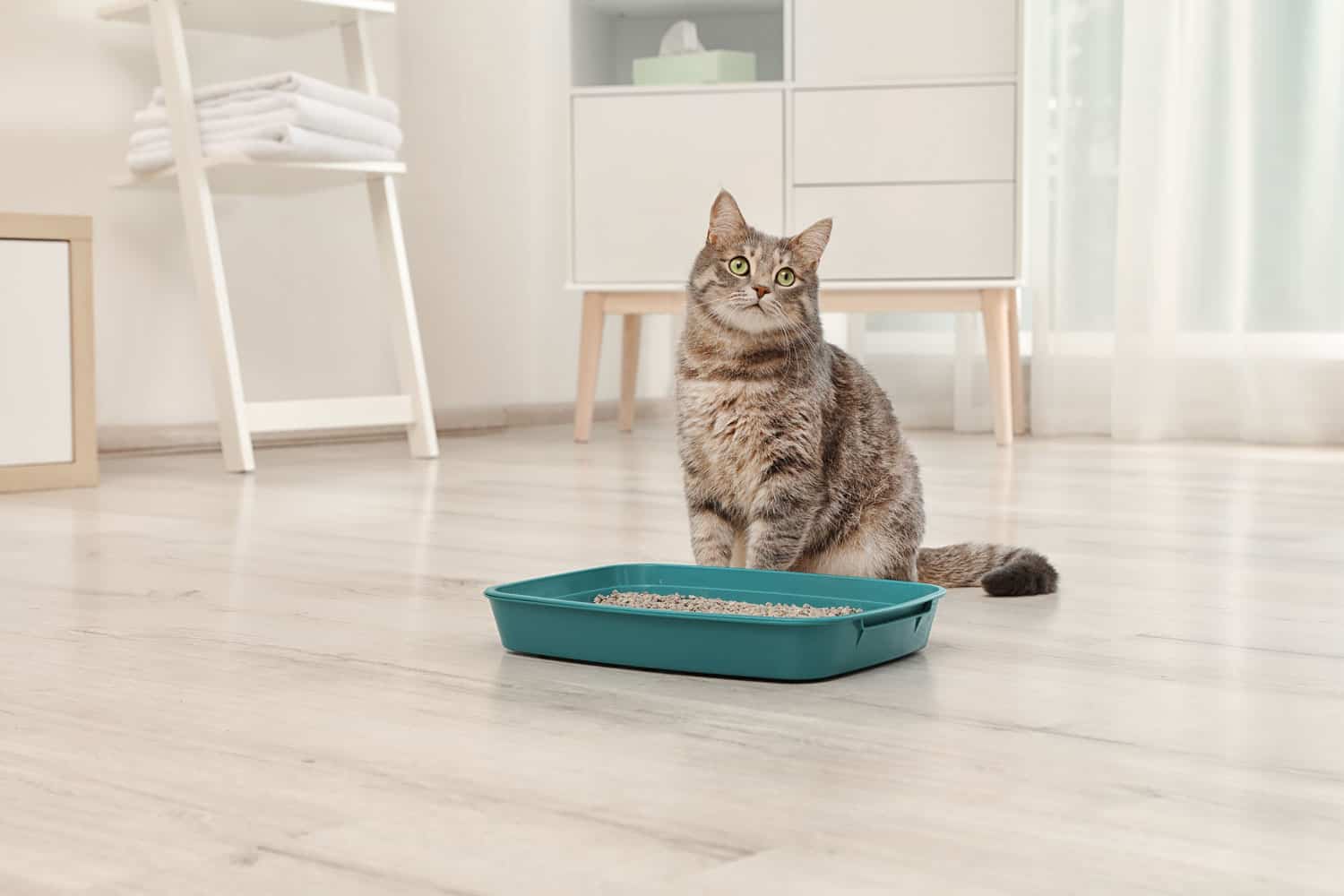 Sadly, there isn't a single answer behind your cat's litter box playing. It could be happening for several reasons. But if you want to figure it out, the process starts by observing your cat's behavior and looking for any signs.

We'll provide a starting point by going over a few common causes for this behavior. You should soon have enough information to figure out the reason behind your cat's playful behavior.

Boredom and cats don't mix well. A bored cat can annoy their owners in several ways, including playing in their litter box or pan. It's a simple way of showing their dissatisfaction with how entertaining their lives are within your home.

If you think your cat is bored, provide them with some extra stimulation. Buying a new toy can do wonders, such as a catnip mouse. It might cure their boredom fully when it's dropped in front of them.

Cats aren't known for accepting changes in their schedules very well. So, if you change the litter type inside their boxes, it might be the reason behind their playing. The new litter could have made them disassociate the box with their bathroom business.

Your cat starts seeing it as a play area or sleeping spot in response. You can avoid this issue by changing the litter gradually over a few days. Otherwise, your cat will get confused.

Some urinary issues can cause cats to spend more time in their litter boxes. The feline could have the feeling of needing to relieve themselves without anything happening.

It can cause them to feel restless, resulting in playing with the litter. These medical conditions include kidney stones, UTIs, and feline idiopathic cystitis.

Meanwhile, a cat rolling around in their litter box could indicate a skin irritation. The culprit could also be fleas or a condition like dermatitis. If you think it's a medical issue, a vet visit should be your next step.

Female cats will spend more time in the litter box when pregnant. Of course, increased urination is a side effect of pregnancy. But it can also be them checking out the litter tray as a location for them to have their kittens.

Your cat's retreating into their litter box could signal a territorial issue. In other words, they view the litter box as a safe space to go when feeling anxious or stressed. This stress could come from a new cat or some dynamic change in the relationship with another feline.

Moreover, the cat might react by claiming the litter box's area. It'll lead to them spreading their scent, whether through kicking around litter or other means. This action is a method of establishing the litter box as their domain. 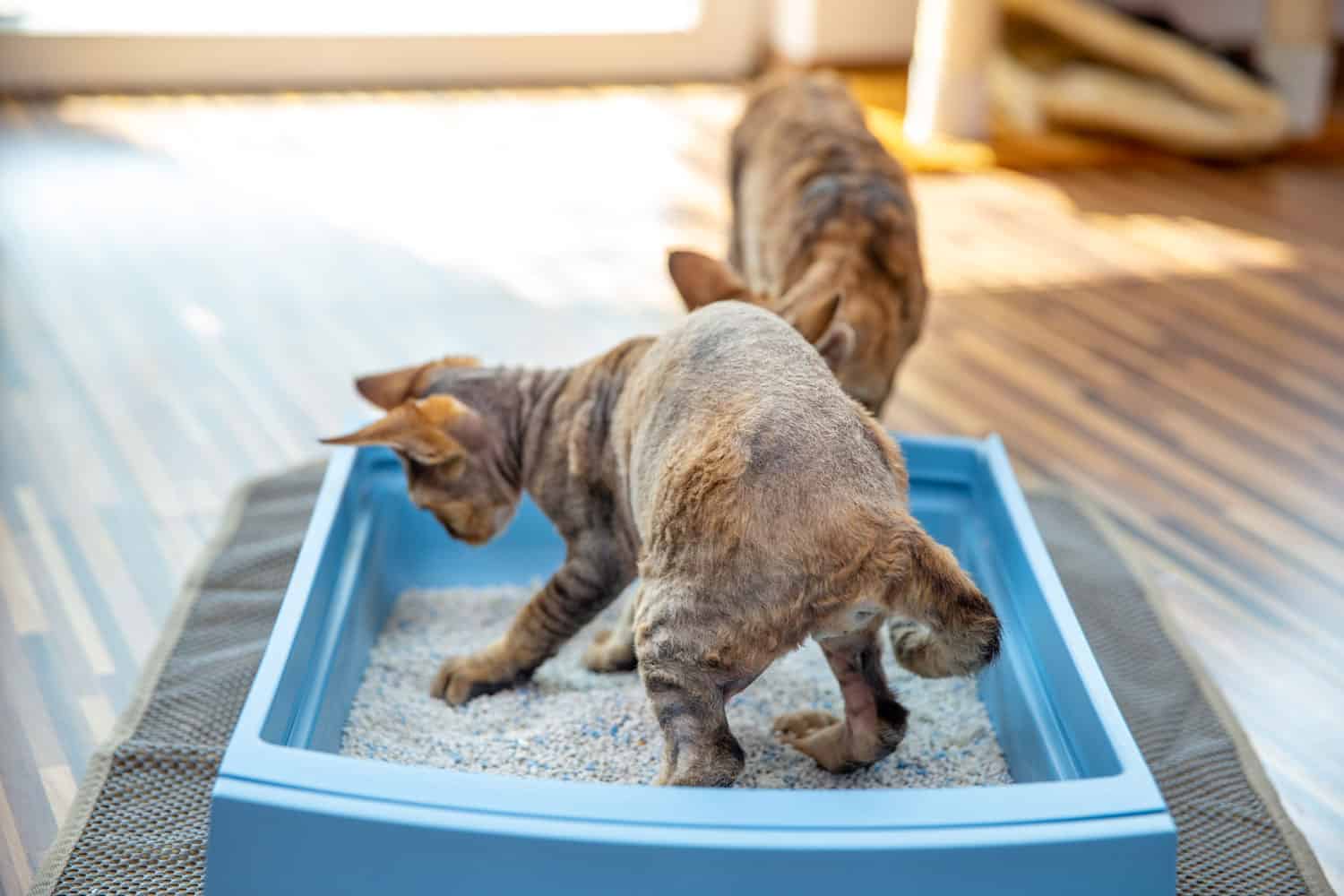 You'll need to combat your cat's litter box playing by using several preventive techniques. For example, it might involve getting a new litter box, putting less litter inside the pan, or giving them more attention.

These methods should have no trouble putting an end to what's causing your cat's litter box behavior.  If they don't, there could be a more serious problem at hand and a vet would be a good idea.

Don't forget to let us know what worked to stop your cat's bad litter box behavior. We'd love to hear about your experiences and whether our methods helped you. Thanks for reading!

If you have time, check out these helpful articles:

How To Clean The Litter Scoop

Is Your Cat’s Litter Box Too Small?